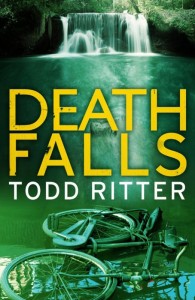 Death Falls by Todd Ritter has just been released as an e-book by Avon (released 29th January 2015.) We’d like to welcome Todd to our blog today. As part of the blog tour, Todd has shared an extract from his novel (released as Bad Moon in the US.) Enjoy.

Maggie tightened her arms around the infant. One of her children was missing. She wasn’t going to let the other out of her sight until he was found.

She descended the stairs into the living room. The TV was still on, still broadcasting surreal pictures from another world. A second astronaut had joined Armstrong, both of them leaping like jackrabbits across the moon’s surface. Maggie moved right past it, not caring. Her only concern was her children, not the moon, or the astronauts, or the fact that she was running outside in the rain in bare feet, denim cut-offs and a T-shirt stained with baby puke.

She made it to the end of the driveway before seeing two men approach the house. One of them was Ken. The other was Mort Clark. Maggie looked past them, hoping to see Charlie lagging behind. He wasn’t.

“Did you find him?” Maggie asked as she met them in the middle of the street. “Where is he?”

He looked pale and haunted — more ghostlike than those astronauts on TV. The rain had flattened his hair. Large drops of it clung to his beard.

“We were watching TV,” he said. “They were showing stuff about the moon landing and Charlie said he wanted to go for a bike ride and look at it. He said he thought he’d be able to see the astronauts from here.”

It was a ridiculous notion, but very much in line with Charlie’s thinking. Maggie easily pictured him hopping on his bike — midnight blue with badly painted stars — and pedaling off in excitement.

“How long ago was that?”

One of Charlie’s favourite places was the creek that rushed through the woods behind their cul-de-sac. There was a dirt path, perfect for biking, that led to a footbridge. From that perch, you could see the water hurtle over Sunset Falls, which plunged thirty feet into a rock-strewn pool. Maggie and Ken had allowed Charlie to ride there alone for the first time this summer. She now regretted that decision.

“Did you check the bridge?” she asked.

When Ken sighed, Maggie suddenly felt the urge to hit her husband. She would have done it, too, had she not been holding the baby. She would have let loose with a few good punches while asking Ken why he didn’t go with their son, why he couldn’t find him, why he was talking to her instead of still looking for Charlie.

“Of course I checked the bridge. It was the first place we went. The police are still there.”

“Where are you going?” Ken asked.

Maggie didn’t answer. Wasn’t her destination perfectly clear? She was going to find her son. End of story.

Death Falls is available as an e-book. Click to view on Amazon.co.uk

On the same night that Neil Armstrong walked on the moon, nine-year-old Charlie Olmstead jumped on his bike to see if he could get a better look. It was the last anyone ever saw of him. After Perry Hollow Police Chief Jim Campbell found Charlie’s bike caught up above a waterfall, he assumed the worse, and so did everyone else except Charlie’s mother. Years later, Eric Olmstead – and famous author and Charlie’s brother – has come back to bury his mother and fulfill her last request: find his brother. To do so he goes to the current police chief and his former sweetheart Kat Campbell, and it isn’t long before they discover that finding Charlie was his mother’s secret obsession, and while she never found him she uncovered clues suggesting that he wasn’t the only victim.

A little about Todd:
Todd is the author of Death Notice and Devil’s Night. He was born in rural Pennsylvania to a bank teller mother and a father who dabbled in taxidermy. He grew up among Bambi-esque forests and wide-open fields straight out of the cropduster scene from North by Northwest. Appropriately, his two biggest influences are Walt Disney and Alfred Hitchcock. A journalist for more than fifteen years, he began is career as a film critic while attending Penn State University. In the interim, he has interviewed celebrities, covered police standoffs and even written and editing obituaries. Todd is a member of the Mystery Writers of America and International Thriller Writers.
For more information, visit Tom’s website: http://www.toddritteronline.com