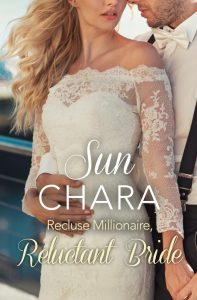 Recluse Millionaire, Reluctant Bride by Sun Chara has been released today by HarperImpulse.

Is his reluctant bride a business risk or a personal necessity?

Stan Rogers, recluse millionaire, must negotiate a risky deal with Stella Ryan, the exotic beauty from his past, to gain custody of his son. But how can he close the deal with her, the one and only woman who flips his switches and pegs him as the enemy?

Martial artist Stella knows she should steer clear of Stan, the man who had shattered her heart and could still destroy her. Four years have passed since their hostile business deal, and now, the American financier is proposing holy matrimony…but she’s the reluctant bride wondering, what’s he up to?

To celebrate the release of her new book, Sun Chara and HarperImpulse have shared an extract. Enjoy!

“Doesn’t look like snow to me, not by a long shot,” she said again. “At least not for another couple of months.”

“We like to be prepared in case it’s early this year.” He hauled himself off the sofa and reached out for the blanket and pillow.

She clutched them tighter, like a protective device. “What about trekking to the limo and driving from there?”

“Not in this darkness, unless it’s an absolute emergency,” he said, tone flat. “Dangerous, especially if you’re not familiar with the trail.”

“To me, this is an emergency.”

“Not enough to risk a broken leg in a pot hole? Be serious, Ms. Ryan.” He raised a brow. “What’s one more day going to matter? You could leave early tomorrow without risk.”

What he said made sense, but she didn’t have to like it. She certainly didn’t want to stay shacked up with him, miles from anywhere. It was time to be proactive, and get her own ticket outa this sticky mess.

His indifference infuriated…then she glanced down at the bedding in

her hands. Odd, she hadn’t had them when she first lay down by the fireside.

She frowned, and an image pushed its way to the forefront of her mind. Somewhere between sleep and wakefulness, she’d felt a gentle hand lift her head and slip the pillow beneath…cover her with the blanket. She thought she’d been dreaming but—

“A sick Karate coach wouldn’t do me any good,” he said, cutting off her polite remark with his callous words.

Jerk. She threw the blanket at him.

The pillow followed. He ducked and it sailed over his head, landing on the sofa behind him.

“Mad about som’m, Ryan?” He rubbed his earring with his thumb, his face the picture of innocence. “I was only thinking of your well-being.”

“Don’t do me any favors, Rogers,” she snapped. “And to think that I’d

begun— ” She skidded to a halt.

“You were saying,” he prompted, amusement twitching the corner of his mouth.

“None of your business.” She turned her back to him and stared at the fire in the grate.

A few flickers struggled to survive. Overly confined, flames couldn’t breathe…fizzled out. She was starting to feel like that and she resented it.

Controlled wildfire could sweep across…clear…a new beginning. He’d done that for her four years ago, when he financed her dojo; she would not let him take that away from her.

Pressure seemed to be building around him, and she pitied the person who got caught in its explosive wake. A showing was sure to be in the cards… and she’d bet, soon. She’d skip out long before then and not get trapped in the crossfire.

Her temples throbbed. She’d almost believed the story about his son. Wha-a-at? She hadn’t seen a child around. And the burning question—where was the wife? 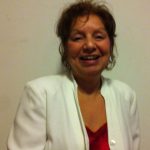 Sun Chara, an Amazon top 100 bestseller, writes sexy, hip ‘n fun contemporary romance for Harper Impulse. JABBIC winner, Manhattan Millionaire’s Cinderella launched her writing career, spinning the ‘global millionaire’s series’. She makes her home in southern California, and has appeared on stage/film to rave reviews in How the Other Half Loves, General Hospital, and McGee and Me. With a Master’s Degree in Education, and membership in SAG/AFTRA and Romance Writers of America, she enjoys sipping designer Frappuccinos topped with whipped cream/sprinkles, and dancing on the beach…making everyday a celebration!

Sun loves to hear from her readers at: https://facebook.com/suncharaauthorpage
or https://twitter.com/sunchara3

To view on Amazon: https://www.amazon.co.uk/Recluse-Millionaire-Reluctant-Bride-Chara-