Review: That Part Was True by Deborah McKinlay 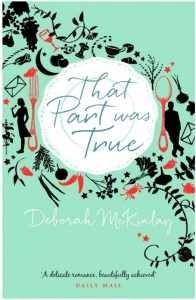 That Part Was True is the latest novel from author, Deborah McKinlay.

Eve Petworth writes to author, Jackson Cooper to praise him for a scene in one of his books. So impressed by her letter, Jackson replies and soon they discover their shared love of cookery and food and start regularly writing to one another. A friendship develops and soon there is even a suggestion of romance despite Jackson already having quite a complicated love life. Eve also has a tense relationship with her daughter who is not far off getting married. Jackson and Eve soon realise that, beyond all the drama, they may actually have a chance together. All they have to do is actually meet.

I had very few expectations going into this novel when I picked it up. I will say though that it has one of the most beautiful book covers. I love it.

This book has been described as a cross between One Day and 84 Charing Cross Road. However, not having any knowledge of the latter, I didn’t have much to make the comparison. This is also the first of Deborah’s books I have read.

The novel is told from both Jackson and Eve’s point of view with their letters woven in within the chapters. It does jump around between the two of them but I liked this. It’s easy enough to keep up. You get to know both of them and how their relationship with one another (despite having never met,) can seem a lot more intimate than the people they are spending time with and how a person you’ve never met can know a lot more about you than people you’ve known a long time.

The two characters are approaching fifty so I couldn’t relate to that but I could relate to the feeling of not quite knowing what you are going to do next which is the situation both Jackson and Eve find themselves in and they question whether they are doing certain things for the right reasons.

They both go on little voyages of self discovery in their own ways. I found myself caring about these characters a lot, especially Eve. I didn’t like Izzy very much if I am honest. I wanted to give her a slap and tell her to stop being a brat. However, even when you look at her story, it is much more than simply a girl who has been spoilt. You realise she is questioning her own self too from the perspective that she felt she never had both her parents.

This book isn’t particularly long so it’s easily read in one or two sittings (at least it was for me). It’s a gentle book but has a lot of meaning and looks at issues of family relationships, marriage breakdowns and lack of purpose. It is character driven. It kept me turning the page as Deborah really does keep you guessing about whether Jackson and Eve actually meet.

This book has a lot to offer and I really enjoyed reading it. I think it’s a beautiful story about two people who are trying to rediscover who they are and what they want and that it is never too late to look at something new. I finished it with a smile.

(The paperback edition of That Part was True was released by Orion on 15th January 2015 and is available in most bookshops It’s also available in e-book format. Click here to view on Amazon.)