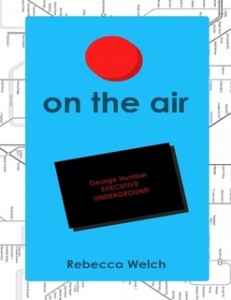 Rebecca is the author of On The Air. Today, she talks about the book that has made an impact on her.

I moved house recently, and when faced with my monolith-like bookshelf I decided it was time for a little cull. A few books that I had read once and enjoyed were tossed (sorry: placed, lovingly) into a hessian bag and ferried across the road to the local Age Concern shop, but there was one book I knew I wouldn’t have parted with in a million years.

I first met Captain Corelli and his mandolin at college (steady on, I’ll make the jokes). I’d been given a beautiful virgin copy of the book ready for my annotations, and as a class we began to read through certain chapters in class, ending each ‘lecture’ as we called it with a series of questions on each chapter. This method had been practiced before with many texts from Shakespeare to McEwan. Normally the books you study at college or uni are groundbreaking and vastly important, but oftentimes boring and irrelevant; especially for a lovelorn sixteen-year-old who thought her life made up the centre of the whole universe.

At its surface, Corelli was not really about the mandolin or even its owner, but about Pelagia, a young Greek girl and her doctor father who lived on the isle of Cephallonia just before it was seized by Axis powers during WWII. Almost like a sitcom, different chapters were devoted to different characters: some heartbreaking, some political, others satirical. But Pelagia, with her wilful manner and desire to be taken seriously and her burgeoning love for a young galoot of a fisherman, was more like my teenage self than I’d like to admit. Her and her homeland’s story plucked at my heartstrings as if it was the titular instrument. Her father’s words in one chapter were so striking and were carried with me throughout all of my romantic history that I had them written into my wedding invitations, and my husband made a ring box out of another copy of the book (I couldn’t bear the thought of him carving up my darling Corelli). The chapter where young Pelagia talks to herself while on the outside loo was a particular inspiration to me when I came to write my own novel – De Bernieres managed to make a stream of consciousness that was so close to most of the things that pass through my head (dirty thoughts and angry laments included), and I wanted all of my characters to be as smartly-written and sensitive as her.

Rebecca Braunton lives on the South Coast of England with two turtles and her very patient husband. When she’s not scribbling down an idea she can be found baking, writing musicals, or waxing people’s faces (she always asks first). Back in 2011 she wrote a book called “ON THE AIR” about a clumsy idiot girl who gets a dream job at a radio station, then has to race against time to stop evil corporate execs taking over (the REALLY EVIL kind that wear pagers and have £150 haircuts). If that sounds like your cup of tea, the book is available to purchase in several formats on Lulu.