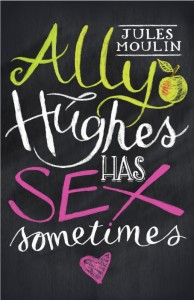 Life is a juggling act for single mother Ally Hughes. Between the classes she teaches at the local university, a monster of a boss, a home that’s falling apart at the seams and a young daughter who doesn’t miss a trick, there isn’t time for anything else in Ally’s life. Especially romance.

Then she meets Jake, and for one incredible, mind-blowing weekend, anything seems possible. But timing is everything and as the weekend draws to a close, fate is not on Ally’s side.

Ten years later, and fate has Jake knocking at Ally’s front door. Now the one that got away is back, and Ally has some serious decision-making to do…

Is there such a thing as perfect timing? Or is love always a game of chance?

The premise for this book intrigued me so I was excited when asked to be a part of the blog tour for Ally Hughes has Sex Sometimes. I wasn’t sure what to expect from this novel but the title is brilliant. I love it. I feel that this book is exploring the idea that it is never too late to seek a happy ending. You just need to have the courage to take it.

It took a while for me to get into this novel but once I got into my stride, I found myself falling into it in a big way. I couldn’t stop reading. I got involved with the characters specifically Ally and Jake (I really liked them as a couple. Jake, even at twenty-one seemed a mature voice.) Ally is now in her forties. She has spent most of her time either raising her daughter or looking after her ailing mother. At the beginning of the novel, her daughter is now twenty and her mother has passed away and she finds herself at a point where she doesn’t know what to do – a situation many people find themselves in at some point in their lives. She can’t quite let go of the responsibilities that don’t exist anymore.

The dialogue felt realistic to me. The style of the writing made it slightly hard to keep up with sometimes but not so much so that I couldn’t get into the book. I liked the story. It was pure escapism for a while. It’s not the fastest paced book but I really liked how the plot developed. It raised some topical points such as the age difference between the two characters and some of the double standards in society today. I found this interesting. I was getting oddly frustrated with Ally at various points. It’s obvious Jake still loves her and she keeps holding back.

This book was not what I was expecting and I really enjoyed it. It’s a great novel to read in the sun (when it makes an appearance that is.) I finished it very happy with the resolution. In my opinion, it’s a great debut novel.

Ally Hughes has Sex Sometimes by Jules Moulin is published by Transworld. The e-book was released on 13th August 2015. Click here to view on Amazon UK. To view the hardback version (released by Dutton Books), click here to go to the Book Depository.  Review copy via Netgalley/Transworld. 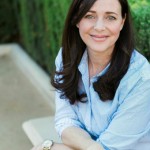 Jules Moulin has a master’s degree in journalism from Columbia University. She spent her twenties writing the Golden Globe and Emmy Award winning series Party of Five and The West Wing. She left Hollywood five years ago in order to work as a full-time mom and splits her time between New York City and Pasadena, California. This is her first novel.

Check out the blog tour banner below for all the other stops on the tour. The next stop is Handwritten Girl.com