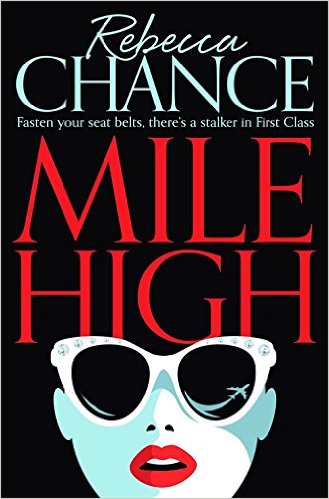 I am very pleased to be welcoming author, Rebecca Chance to Novel Kicks today. Her novel, Mile High was released on 13th August 2015 by Pan.

First class is about to get dangerous . . . Pure Air’s new LuxeLiner is flying from London to LA – its inaugural journey – with a first-class cabin packed with A List celebrities. As the feuding crew compete to impress their famous passengers, the handsome pilot tries to win the attention of a pretty young stewardess.

But one VIP singer is battling something seriously sinister: watching her every step is a very determined stalker, someone who will go to any lengths to get the star to satisfy their desires. At thirty thousand feet there is nowhere to run, and nowhere to hide . . .

As part of her blog tour for her new novel Mile High, we got to chat with Rebecca.

Welcome Rebecca. Thank you so much for joining us. Your new book is called Mile High. Can you tell us a little about it and where the idea originated?

It’s a glamorous thriller set onboard a night flight from London to LA, on a very luxurious plane whose first class cabin is absolutely gorgeous! Because it’s a new route for the airline, there’s a whole gaggle of A-list celebrities aboard to publicise it – a beautiful singer who’s going through heartbreak, a very randy chef, an Oscar-nominated actress. And the airline boss too, who’s modelled on quite a famous one… But there’s also a stalker on board who’s determined to join the Mile High Club with the singer, so the tension builds all the way through to a very dramatic ending.

What planning did you undertake before beginning this book? Did you get any first hand accounts of what it is like to work as cabin crew?

OH yes! I have several flight attendant friends and they were fantastic at giving me advice and telling me all sorts of saucy behind-the-scenes stories! I sat down with them over drinks and listened for hours before I even started to outline as I wanted the book to be as accurate as possible.

What is your writing day like and where do you like to write? Do you have any writing rituals?

Get up around 9, have a very strong cappuccino, read through my Facebook and Twitter, read what I wrote the day before, tell myself I have to start writing before I turn on Judge Judy. Turn on Judge Judy….

Any tips for combatting writers block?

I’ve never had it. I don’t quite believe in it, honestly. Writing is my job and I love it, so I don’t get blocked. But certainly the fact that I get paid when I submit my latest manuscript helps!

That’s a really good question! The answer that popped into my head was ‘moist’ as it sounds so exactly like what it’s describing.

Which fictional character would you like to be sat next to on a plane and what would you talk about?

Another great question! Definitely Miss Marple. I would ask her all about the murders she’s solved and the people in St Mary Mead. I love Agatha Christie.

What song would be your anthem and why?

“Hit Me With Your Best Shot” by Pat Benatar. I’ve danced to that on the bar of the Coyote Ugly in New Orleans many times. It’s a tough song and I’m pretty tough!

Which author do you admire most and why?

It’s very hard to pick just one, but I love Peter O’Donnell, who wrote the Modesty Blaise book (and comic) series for creating such a strong, kick-ass female character leagues ahead of her time. 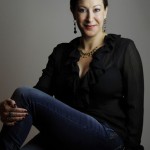 Rebecca Chance was born in Hampstead to international art dealer parents, and grew up in the exclusive millionaire’s row surroundings of London’s St John’s Wood. Tiring of her cushioned, privileged existence, she ran away to Tuscany to live a wild bohemian life on a wine-making estate, where she lived in a 14th century villa in a Chianti vineyard, partying with artists, learning Italian, and picking grapes. But big city life was calling her, and after staying in Rome and Porto Ercole, she moved to Manhattan, lured by the glamorous single-girl existence and nonstop nightlife. She spent a decade living the Sex and The City dream in SoHo, equally at home in an uptown penthouse on Fifth Avenue overlooking the Metropolitan Museum, or downtown dancing on the bar of the Coyote Ugly for kicks. Eventually, a handsome American husband in tow, she moved back to London to settle down (as much as she can) and finally fictionalize some of her most exciting and glamorous experiences into her bestselling blockbuster novels.Rebecca’s interests include trapeze, pole-dancing, watching “America’s Next Top Model”, and cocktail-drinking.

For more information on Rebecca’s novels, visit her website: http://www.rebeccachanceauthor.com

Click to view Mile High at The Book Depository. 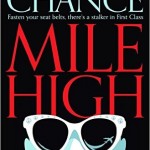 Our verdict on Mile High:

I was not familiar with Rebecca’s books prior to reading Mile High so I was not sure what to expect. This book was pure escapism. It’s main focus is on international singing star, Catalina and the fact that there is a stalker who has used the first flight of a new plane to get close to her. The story flicks from present day and flashbacks and it does this effortlessly.

All of the characters are larger than life. I loved characters like Catalina and Jane and I really did want to slap Lucinda. She’s not a nice character but I felt a little sorry for her too. She’s in love with a man who has a wandering eye and I feel her behaviour was based on self preservation to stop herself from getting hurt and you can’t blame her really.

The story is well plotted and there were many twists and turns. I thought I knew what was going on and who the stalker was but there was a big twist at the end. I laughed in places, gasped out loud in others. This book really is a little bit of a rollercoaster. It’s long at nearly five hundred pages but it is such a perfect holiday read and you really do get a great plot in those five hundred pages.

Check out the blog tour banner for other stops on the Mile High Tour. 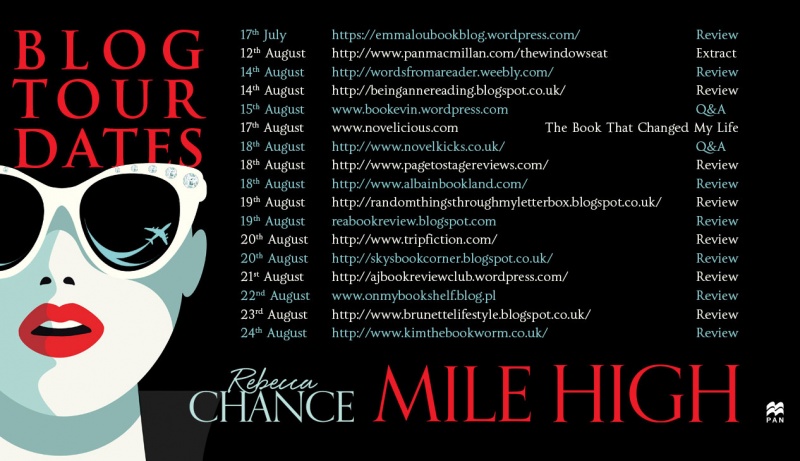