Beneath a Burning Sky by Jenny Ashcroft

Book Review: Beneath a Burning Sky by Jenny Ashcroft 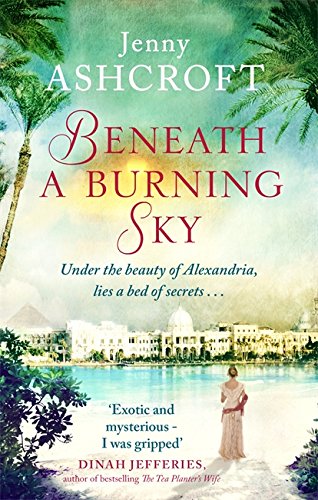 When twenty-two-year-old Olivia is coerced into marriage by the cruel Alistair Sheldon she leaves England for Egypt, his home and the land of her own childhood. Reluctant as she is to go with Alistair, it’s in her new home that she finds happiness in surprising places: she is reunited with her long-estranged sister, Clara, and falls – impossibly and illicitly – in love with her husband’s boarder, Captain Edward Bertram.

Then Clara is abducted from one of the busiest streets in the city. Olivia is told it’s thieves after ransom money, but she’s convinced there’s more to it. As she sets out to discover what’s happened to the sister she’s only just begun to know, she falls deeper into the shadowy underworld of Alexandria, putting her own life, and her chance at a future with Edward, the only man she’s ever loved, at risk. Because, determined as Olivia is to find Clara, there are others who will stop at nothing to conceal what’s become of her.

Beneath the Burning Sky focuses on twenty-one year old Olivia. She has been forced into marriage to Alistair Sheldon and is moved from England to Egypt where she grew up as a child.

Alistair is not the loving husband. The only thing keeping her going is the chance to see her sister whom she’s not seen for years and Edward, who is a Captain in the army and is living with Alistair and Olivia.

When her sister Clara goes missing, Olivia is frantic trying to find out what happened to her. The men are not forthcoming with any details only telling her it is someone after ransom money and Olivia finds herself shut out of the search for Clara.

When this book begins, you are immediately pulled into the plot. Olivia is in a place she has not seen since she was a child and you really do feel her trepidation as she arrives in Egypt. The description of her surroundings is rich and compelling.

I really wanted to keep reading to find out what happens to these women. It’s set in the 1800’s where women in this setting were pretty much treated like property and something that should be content with being controlled.