Blog Tour: Spandex and The City by Jenny T. Colgan

Blog Tour: Spandex And The City by Jenny T. Colgan 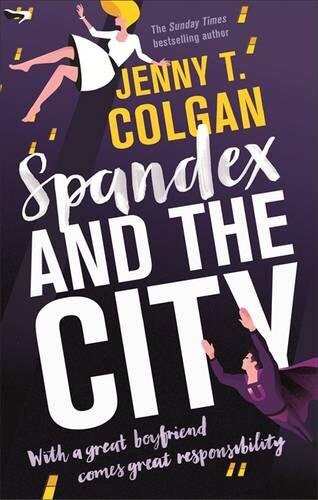 LOCAL GIRL SWEPT OFF HER FEET

She’s embarrassed beyond belief when the handsome stranger she meets in a bar turns out to be ‘Ultimate Man’ – a superpowered hero whose rescue attempt finds her hoisted over his shoulder and flashing her knickers in the newspaper the next day.

But when Holly’s fifteen minutes of fame make her a target for something villainous, she only has one place to turn – and finds the man behind the mask holds a lot more charm than his crime-fighting alter-ego.

Can Holly find love, or is superdating just as complicated as the regular kind?

When I first got asked to read this book as part of the blog tour, I found the premise utterly intriguing although at the same time, not quite knowing what to expect. I’m a great fan of Jenny Colgan’s previous novels. I think it’s no exaggeration to say that I love her and her books, (for this novel, she’s writing as Jenny T. Colgan.)

This book is something very different not only for Jenny but also in general.

Holly hasn’t always been lucky in love and is under pressure from her friend to find someone when we meet her at the beginning of the novel.

When something happens that she’s not expecting, she meets Ultimate Man, the resident superhero.

Also, in the ensuing chaos following their meeting, Holly ends up experiencing her fifteen minutes of fame.

Fame and a new relationship with Ultimate Man and his alter ego is full of the ups and downs you’d expect when dating a superhero.

This book pretty much had me laughing from the beginning and I got drawn into it immediately. I couldn’t put it down.