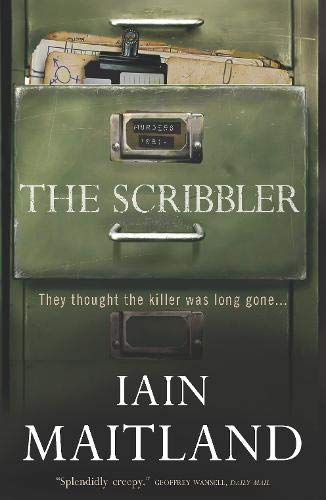 I am happy to be welcoming back Iain Maitland to Novel Kicks. He is here with his new novel, The Scribbler.

‘He’s back, Carrie. The Scribbler is back.’

DI Gayther and his rookie colleague DC Carrie have been assigned a new caseload. Or rather, an old one… cold cases of LGBTQ+ murders dating back to the 1980s and beyond. Georgia Carrie wasn’t even born when the notorious serial killer began his reign of terror across the East of England. Roger Gayther was on the force that failed to catch him and remembers every chilling detail. Now, after all these years, there’s a sudden death featuring The Scribbler’s tell-tale modus operandi. Can Gayther and Carrie track the murderer down and bring him to justice before the slaughter starts again?

Iain has shared an extract with us today.

‘Inside the Mind of a Killer.’

The man with the gloves knew this moment had been coming for a long time now. Had known, one way or the other, for almost half his lifetime. He had thought, on and off, how it might all end. Being overpowered by someone stronger than him, most likely. Or spotted with somebody who was later reported missing. His van seen, the registration noted down carefully. Two and two put together. The knock on the front door late one night. 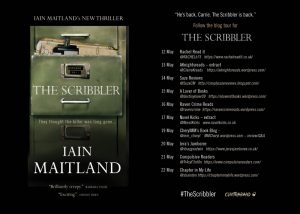 And he had thought about what he would do when it did. He’d rush out of the kitchen through the living room to the back door by the vegetable garden to get away. But he knew there would be other police out there, maybe armed, just waiting, in hiding for him.

There were other possible endings. He would fight back if he were overpowered and held down by his planned victim as they called the police on their mobile phone. He’d struggle endlessly for the chance to escape. He’d never give up.

But, of all the various permutations, he had never imagined it would end this way. A police patrol car on his tail, playing with him, toying, as they closed in on his van.

He looked again at the wing mirror, saw the police car was still there, so close to him now that if he braked, it would be sure to crash into his van.

Did not know what to do. A sense of helplessness.

He could accelerate away, racing for his life. But they would most likely keep pace, forcing him off the road. An unseemly scramble as he tried, unsuccessfully, to get out of the van and run. Even if he got away, where would he go? They had his registration number, knew who he was, where he lived.

Brake sharply then. The police driver and passenger, taken by surprise, shaken by the crash. Dazed and bewildered, he could take his chances with them, armed with his screwdriver and Stanley knife. Up and out of his van fast, to the police car, tugging open doors, slashing and stabbing them. It was quiet here, on this road. No one around. Nobody to see. No one to interrupt him. If he were quick, could brace himself for the crash, have the element of surprise on his side, he could just about manage it.