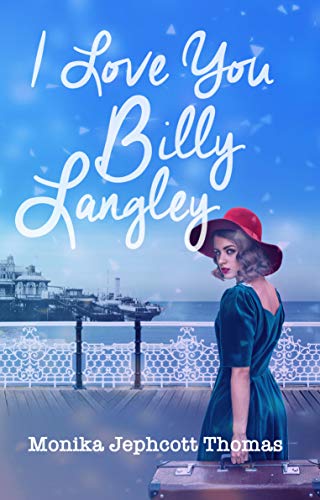 Hello to Monika Jephcott Thomas and the blog tour for her latest novel, I Love You Billy Langley.

Twenty-year-old Netta can’t wait to leave Germany and teach in Brighton, England. It’s the height of the swinging 60s, but Netta hasn’t bargained for the prejudice she’ll receive in a country full of anti-German sentiment just twenty years after the war.

She finds solace in Billy, the school caretaker, with whom she falls in love.

But when she takes him back to Germany at Christmas it’s Billy’s turn to be on the receiving end of a frosty welcome.

I have reviewed the novel but first, Monika has shared an extract. Enjoy.

Netta Portner looked around her bedroom as if it were the last time she would ever see it. It wasn’t.

Not just yet. But she felt the need to capture everything in her memory now, before the chaos of leaving ensued and clouded everything. As she scanned the room she caught sight of herself in the mirror on the dressing table. She turned to face her reflection, smoothed down her dress, adjusted her glasses, and raised her chin in the confident manner she prayed she could adopt when she stood in front of a class of comprehensive school students next week in the south of England.

‘Here!’ Her mother came hurrying into the room, dumping three suitcases of various sizes onto the bed.

To Netta the hurrying and dumping seemed completely unnecessary and typically dramatic. For a split second Netta wondered if it was designed to mask a sadness at her imminent departure from the nest, but that notion was soon buried under her general irritation with her mother, which Netta had cultivated throughout her teenage years.

‘These served me well when I moved here from Kunzendorf,’ said her mother.

‘During the war? When you were pregnant with me?’ Netta asked, delighting in her albeit embryonic presence in the story her mother had regaled her with on many occasions – the story of an arduous journey all the way across a devastated Germany on its knees in the final months of the Second World War. Since then Netta had never been much farther from home than the north coast for family holidays.

‘Hm-mm!’ her mother sang her response as nonchalantly as she could. ‘So a little jaunt to England should present no issue for them.’

‘Well it’s hardly a race across a vast nation being bombed mercilessly by the Allies either, is it?’ her mother said.

Netta seethed as she flipped open the lid of each case.

Her mother, hands on hips, looked around the room as if she had never seen it before. ‘At last I can give this room a damn good clean.’

Netta looked daggers at her mother’s back as she ran her finger along the chest of drawers and grimaced at the dust she found there.

‘Oh please, mother! When was the last time you cleaned anything?’

‘Well, I’ll get Emilia to do it. Chuck out all this rubbish too.’