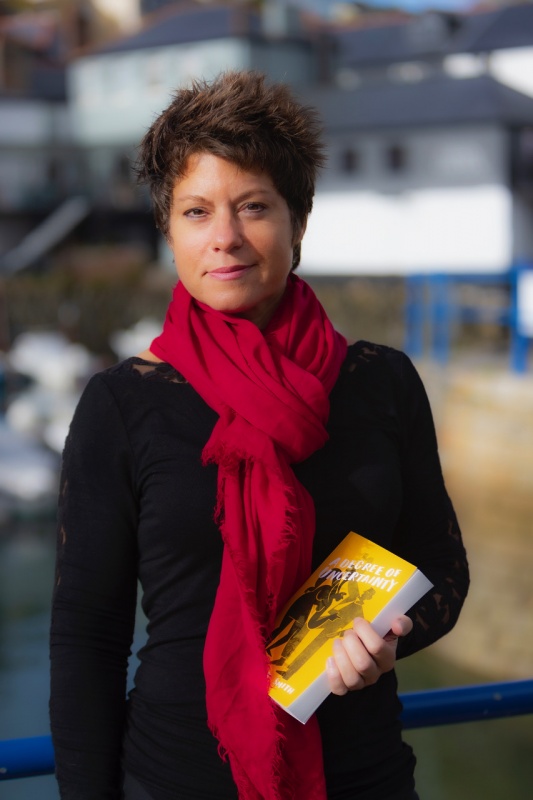 Hello Nicola, thank you so much for joining me today. Can you tell me a little about your debut novel, A Degree of Uncertainty and what inspired the story?

Thank you for inviting me to chat with Novel Kicks, Laura.

A Degree of Uncertainty explores how a Cornish community is being ripped apart by its growing university, with an influx of students upsetting the balance of things and challenging the way life has always been. Some residents — and business people — see it as progress and welcome the expansion. Others feel threatened by the change in dynamics.

Against this backdrop of small town politics, the story is very character driven, exploring love, friendship, loyalty and betrayal. The shifting community pits friends, neighbours and colleagues against each other and reopens old wounds…

Do you think character or plot is more important in a story?

I think that’s a little bit like asking which is more important, a bra or knickers… I agree that some books are weighted more in favour of one or the other, but for me, you need both. That doesn’t mean the plot has to be a rip-roaring rampage punctuated with multiple murders and endless twists, but the storyline needs to travel from A to B.

That said, I can really enjoy a book where a deeply plausible character goes on an emotional journey and, in essence, very little happens. But I don’t think the best plot in the world will stand up in the hands of characters in whom readers don’t believe or, worse, don’t care about.

What would be on a playlist for this novel?

One of the two key protagonists is Harry Manchester, a proud Cornishman and successful local businessman who vows to save his beloved community from being overrun by students and ruined by change. Harry is a keen music fan and ex-drummer and he often seeks solace in Queen music, letting the lyrics guide his mood and — in one instance — his actions. So it would have to be Queen’s Greatest Hits. (He also has an incident where his Bohemian Rhapsody ring tone goes off at an untimely moment, but that’s another story…)

What was the biggest challenge when writing your first book?

Starting a book is a challenge. I’d had the idea for a while and I began making notes and sketching out characters and plot, but actually writing those first words seemed like a terrifying leap!

I did a ‘Starting to write your novel’ course with the literary agency, Curtis Brown, which gave me the tools to plan and start the book. It also gave me a huge dose of confidence as I was chosen as ‘Most promising student’ on the course, and was rewarded with a one-to-one tutorial with one of the agents. That was a massive shove in the right direction, and the novel began…

What’s your typical writing day like? Where do you like to write? Do you prefer silence, do you need coffee?