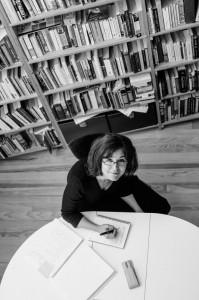 In 1953, my grandmother, Anna Munster, packed her bags and walked out on my grandfather Armand Jacoubovitch, taking the typewriter, a grapefruit knife, and their two children.

Five years before that day, in 1948, Armand and Anna bought a ruined stone house in the south of France a month before moving to America to start a new life.

Eight years before that day, in 1945, Anna gave birth to their first child while Armand prepared to begin his job at the Nuremberg Trials as one of just two or three court interpreters who were also victims of the accused.

Eleven years before that day, in 1942, Armand and Anna climbed over the Alps in a snowstorm, reached the border an hour after the guards had gone off duty, and escaped Nazi-occupied France to neutral Switzerland.

Thirteen years before that day, in 1940, when France fell to the Nazis, Armand walked three hundred kilometers to hide out with Anna in a village in the French Pyrenees.

And seventeen years before that day, in 1936, Armand and Anna met in a café in Strasbourg and fell passionately in love.

Here’s the thing: I never knew.

The story of what happened between my grandparents both before and after their divorce was total enigma to me throughout my childhood and young adult life. No one could tell me when or how they had met, or when or why they had gotten married. No one could explain just what had made their separation so acrimonious. No one knew, because half a century later, they still wouldn’t speak to one another. If they referred each other at all, it was in cryptic half-sentences. My grandfather couldn’t even bear to utter my grandmother’s name. All that remained of their life together were a few snapshots in a faded photo album. Those snapshots, those tiny, beautiful remnants of a life the war had completely destroyed – they were the beginning of writing this book: from a young age, I desperately, desperately wanted to know what had happened between them.