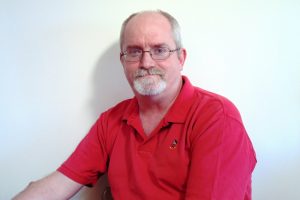 A lovely big welcome to Mick Arnold who is here with the blog tour for the second novel in the Broken Wings series. Hi Mick. It’s brilliant to have you back on Novel Kicks. In Wild Blue Yonder, we are back with the girls at the Air Transport Auxiliary. What can we expect from book two?

Many thanks for having me back Laura. You must be a glutton for punishment!

Well, it’s about six months on from the events in ‘A Wing and a Prayer’ and as usual, fate isn’t being kind to some of the girls.

Exactly when their personal relationships seem to be trotting along nicely, an accusation of theft is laid at their door and though not a taxing mystery, it’s still an unwelcome distraction. There are bombing attacks to withstand from the Luftwaffe, POW husbands and sons to worry about, clothing is still going missing, and one of the girls is still suffering the after effects of being stabbed in books 1, ‘A Wing and a Prayer’. So, an awful lot going on for them to deal with.

How has your writing process changed between writing the first and second novel in the series?

Not a lot really. As I didn’t know if I’d be able to get a contract for the first one, I only had the barest of idea about a sequel, so when I was asked for it and after I’d recovered from the minor panic attack, I set to. I’m not a planner, so the process was the same as for the first book. Type away and see what comes to mind. Luckily, something did!

How long does it take you to write a book?

So long as I don’t allow myself to get too distracted – damn you YouTube! – I can write a 100K story in about 3 – 4 months. As I tend to edit each chapter as I go along, my first drafts are really somewhere between 2nd and 3rd’s in reality.

What was your favourite book when you were a child?