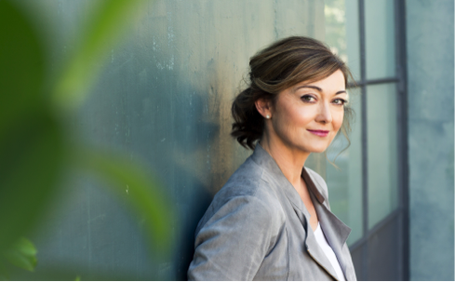 Maggie’s Kitchen is the latest novel from Caroline Beecham (which is due to be released by Ebury Press on 27th July 2017)  and I am happy to be welcoming her to Novel Kicks today.

When the British Ministry of Food urgently calls for the opening of restaurants to feed tired and hungry Londoners during WWII, aspiring cook Maggie Johnson seems close to realising a long-held dream. After overcoming a tangle of red tape, Maggie’s Kitchen finally opens its doors to the public and Maggie finds that she has an unexpected problem – her restaurant is too popular, and there’s not enough food to go round.

Then Maggie takes twelve-year-old street urchin Robbie under her wing and, through him, is introduced to a dashing Polish refugee, digging for victory on London’s allotments. Between them they will have to break the rules in order to put food on the table, and, perhaps, find love into the bargain…

Thank you for joining me today, Caroline. Can you tell me a little about your book, Maggie’s Kitchen and what inspired it?

‘Maggie’s Kitchen’ is a novel that follows the fortunes of Maggie Johnson as she sets up and runs a British Restaurant in London during the Second World War. The story focuses on the relationships that she develops with the community and in particular with Robbie, a twelve-year-old runaway, and Janek, a Polish refugee. Together they struggle through government red-tape to open the restaurant and then battle food shortages and community crisis to keep their doors open.

The novel is inspired by real events and I was intrigued by the fact these restaurants were created to help with the food shortages during the war. It seemed timely to write a story about them given the renewed interest in ‘paddock-to-plate’ and ‘nose-to-tail’ eating and our obsession with food.

The novel includes excerpts from the original Ministry of Food’s War Cookery Leaflets together with recipes that have been updated to suit contemporary tastes. The story is ultimately about hope and finding courage in the most unlikely of places.

What are the challenges of writing historical fiction?

Being inspired to write fiction based on real events and/or people and their achievements feels like a real privilege but there is also the danger of becoming too obsessed with your research and wanting to include everything in your book.

The key is to recognise how much detail to use to create the setting and as signposts to make the era authentic, but also remember you are creating a fictional work that needs to be real for your characters.

I’ve learnt that the first step is to recognise when to stop researching and start writing. The next is to know when to leave the research behind and just write freely, knowing that you can go back and check facts and details later; the most important thing is story and character.

That said, I was surprised at how strict the editors were in their fact checking with places, street names, and bus routes from the time for instance, but I suppose that’s good news for readers!

What is the best and hardest thing about being a writer?

The best thing about writing is being able to immerse yourself in fascinating subjects and people and different and interesting worlds; and your imagination of course. Initially I had wanted to write non-fiction because of my background working in television as well as to carry on storytelling in a different way after stopping fulltime work when I had children, but then I found myself drawn to fiction because it seemed to offer up more opportunities.

That’s what happened with ‘Maggie’s Kitchen’; I could have developed a documentary about these British Restaurants that few people had heard about but the characters of Maggie, Janek and Robbie emerged quite quickly, and the rest they say is history!

The hardest thing about being a writer is having the space and time to write. Everyone is very busy these days and juggling a family with other work commitments can be challenging.

When people asked what I did before I was published, I used to apologetically explain that I was writing a novel and they either rolled their eyes or were genuinely interested, but I didn’t feel as if I could legitimately say that was my work, even though I was totally committed to it and quite disciplined about spending time writing because I knew the novel wouldn’t write itself and that was what I had to do.

Now I realise that I need space around writing, not just the physical sitting down at the desk or doing research space but real headspace and that’s not always easy to get. I understand now why there are so many writers’ retreats and I think I need to apply for one!