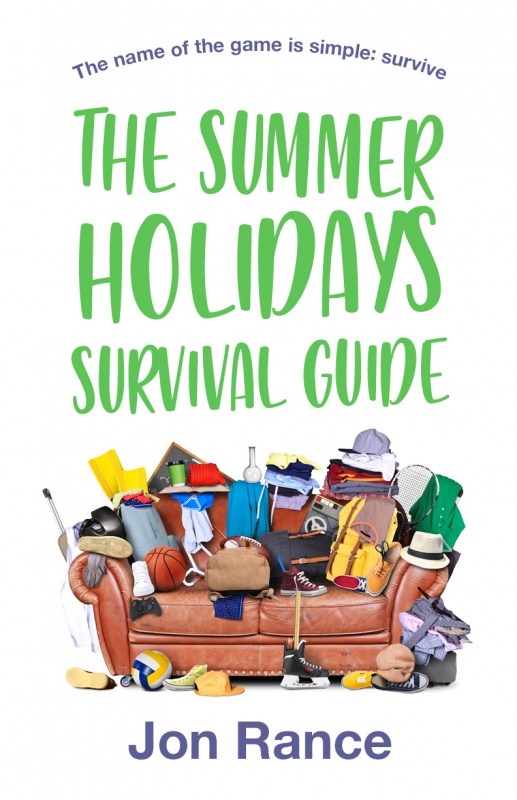 The brilliant Jon Rance is back with his new novel, The Summer Holidays Survival Guide (perfectly timed for the approaching summer holidays.)

Two parents. Three children. One senile grandad. Six weeks. How bad could it possibly be?

For teacher, Ben Robinson, the school summer holidays mean one thing – spending six weeks with his kids. This year, however, he also has his father and one very angry wife to contend with. The name of the game is simple: survive.

Ben embarks on a summer of self-discovery that includes, amongst other things, becoming besotted by a beautiful Australian backpacker, an accidental Brexit march and a road rage attack. There’s also the matter of saving his marriage, which is proving harder than he imagined, mainly due to an unfortunate pyramid scheme and one quite large bottom.

But when Ben learns his father has a secret, it takes the whole family on a trip to Scotland that will make or break their summer – and perhaps Ben’s life.

On the last day of his blog tour, Jon has joined me today to talk about his evolution as a writer. Welcome Jon. Over to you.

Hello! A huge thank you to Novel Kicks for having me on their blog. It’s exciting to be here! So, my new book, The Summer Holidays Survival Guide, is out and just 99p for a limited time! Today, the last stop on my blog tour, I’m going to be talking about my evolution as a writer. Let’s get started!

For those of you who don’t know me, The Summer Holidays Survival Guide, is my seventh novel. It all started way back in the heady days of 2011! We had our daughter in 2009 and our son was on the way, and I was a stay-at-home dad. I chose to be a stay-at-home father so I could write. I’d written a couple of unpublished novels, but then I suddenly got my big break. My self-published novel, The Thirtysomething Life, unexpectedly shot up the charts and broke into the Kindle top ten. I was as shocked as anyone. On the back of that success, I got a two-book publishing deal with Hodder and Stoughton and then an agent. My novels are usually comedies that deal with issues like marriage, family, parenting, falling in love, growing up or as it says on my website – author of contemporary novels about life, love, and all the icky bits in-between. I think, to be fair, it’s usually the icky bits in-between I’m most interested in.

So, now you know a bit about me, let’s talk evolution. My first novel, This Thirtysomething Life, was a diary about one man, Harry Spencer, early thirties, trying to get through the pregnancy and birth of his first child. My latest book, The Summer Holidays Survival Guide, is the diary of one man, Ben Robinson, 44, trying to get through the summer holidays with his family. Evolution? Well, yes. I wrote my new book because I realised last summer, as I was on a six-week holiday with my own family through England and Scotland, how far we’ve all come and how much has changed. I wrote, The Summer Holiday Survival Guide, as an update on my first book. It’s what happens down the line when the kids are older, the parents are older, and all the complications that come with that. It was as much a reflection on my own life as anything else.