Blog Tour: Win a copy of Campari for Breakfast by Sara Crowe 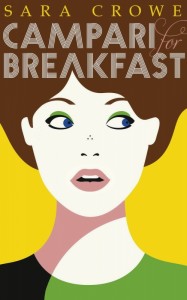 We’ve been so delighted to be part of the blog tour for Campari for Breakfast. To celebrate the paperback release of Sara Crowe’s debut novel, thanks to Sara and Transworld, we have two copies to give away.

Simply comment on this post by the closing date which is 23.59 on Tuesday 3rd February 2015. The two winners will then be chosen at random from the entrants and announced on the Novel Kicks blog on Wednesday 4th February 2015. UK only. Good Luck!

(The winner will also be notified via e-mail. We will use the address you provide when you enter the draw. Don’t worry, it’s safe with us. Also don’t forget to check your junk folder. I try to get the prizes to you as quickly as I can. In this instance, the prize is coming directly from Sara’s publisher so please allow up to 28 days for delivery. If you’ve not received your prize after this time, please contact us via the blog and not social media as there is a danger with social media that we may miss your message.)

In 1987, Sue Bowl’s world changes for ever. Her mother dies, leaving her feeling like she’s lost a vital part of herself. And then her father shacks up with an awful man-eater called Ivana.

But Sue’s mother always told her to make the most of what she’s got – and what she’s got is a love of writing and some eccentric relatives. So Sue moves to her Aunt Coral’s crumbling ancestral home, where she fully intends to write a book and fall in love . . . and perhaps drink Campari for breakfast

(Released in paperback by Transworld on 29th January 2015.)

9 Responses to Blog Tour: Win a copy of Campari for Breakfast by Sara Crowe