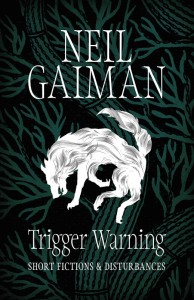 The author of Stardust and The Ocean at the End of the Lane is due to release the third collection of short fiction. It’s called Trigger Warning: Short Fictions and Disturbances and it’s due for release on 3rd February 2015 in hardback and e-book formats.

Here’s a bit of the blurb:

In this new volume, Neil Gaiman pierces the veil of reality to reveal the enigmatic, shadowy world that lies beneath. Trigger Warning includes previously published pieces of short fiction-stories, verse, and a very special Doctor Who story that was written for the fiftieth anniversary of the beloved series in 2013-as well as BLACK DOG, a new tale that revisits the world of American Gods.

Trigger Warning: Short Fictions and Disturbances is published by Headline and will be available on 3rd February 2015.