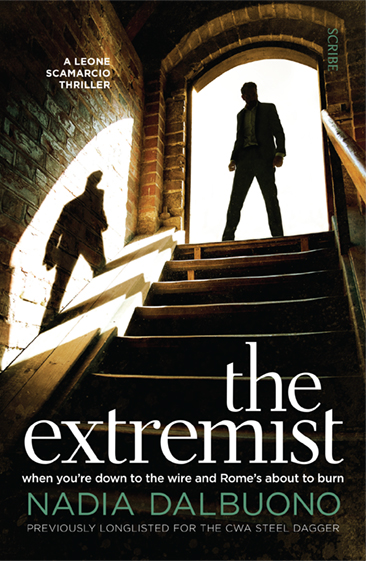 The Extremist by Nadia Dalbuono is the fourth novel in the Leone Scamarcio series and I am pleased to be part of the blog tour today.

When a group of terrorists carry out a series of attacks in Rome, Detective Leone Scamarcio gets an unexpected call ― the men, who appear to be Islamic extremists, say they will only negotiate with him.

Scamarcio is given just twenty-four hours to meet the terrorists’ demands, or their hostages will be killed, along with thousands more.

The only catch? He cannot involve the police or the security services.

Racing against both the clock and his own colleagues, Scamarcio must uncover the truth behind the attacks before it’s too late. But, as he begins to investigate, he finds that every question turns up five more … As usual for this son-of-a-Mafioso policeman, nothing is as it seems.

Nadia has kindly shared an extract from her new novel with us today. Here is a part of the first chapter. I hope you enjoy.

The boy enters the McDonald’s. It is a relief to escape the cloying heat and its undercurrents of summer drains and tourist sweat. He wipes his forehead with the back of his hand, shrugs the bag off his shoulder, and looks around. He counts fifteen people queuing at the tills, most of them teenagers — clutching backpacks and squinting at iPhones. To his left, nearly all the tables are full — more students and a cluster of Japanese tourists. He takes in a few young families, kids no more than four or five. Panic is stirring in his gut, turning it liquid. He tastes acid on his tongue and wants to retch. He swallows, tries to take a breath.

To his right, the place is a little emptier — only four of the tables are occupied. His eyes settle on a group of schoolgirls in uniform, their checked skirts too short, their laughter too loud. Behind the girls is a dishevelled old man, probably a vagrant. He’s tearing the wrapper from a meagre burger, his eyes darting furtively as if he’s afraid someone will swipe it.

The boy feels sweat running down the back of his neck; he notices a tremor in his leg. He turns and sees his three companions standing in the doorway. Just the sight of them makes his heart hammer. He swallows again: his throat dry, his tongue bulky. He wishes he’d taken something like they’d suggested.

He waves them forward, his arm a little shaky. Dafiq frowns. The boy doesn’t understand why. When the others are level with him, he closes his eyes and tries to slow his racing thoughts. He counts to five, then gives them the sign. The air shifts, and he knows they’re reaching for their guns now. He nods, and the AKs emerge quietly from beneath their coats.

The firing starts before even he expects it. His ears are humming, and the sweat is now slick between his shoulder blades. He coughs — the air is already dense with cordite. People are running, screaming, falling. Food is tumbling, being trampled into the floor tiles, where it mixes with blood. Someone slips on a patch of mayonnaise and rams their hip into a rubbish bin. A baby cries, a woman sobs. The boy closes his eyes and raises his weapon.

‘Allahu Akbar,’ he whispers as he pulls the trigger.

The Extremist was released by Scribe UK in February 2018. It’s available in paperback at most UK book shops and is also available as an eBook. Thank you to Nadia and to Scribe for inviting me to be a part of the blog tour. 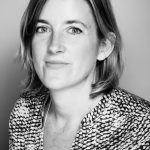 Nadia Dalbuono spent 15 years working in factual TV in the UK before turning to crime writing. The Few was her first novel followed by The American. The third in the series, The Hit was released earlier this month by Scribe.

For more information on Nadia and her books, visithttps://nadiadalbuono.com/ or you can catch up with her on Twitter: https://twitter.com/NadiaJDalby