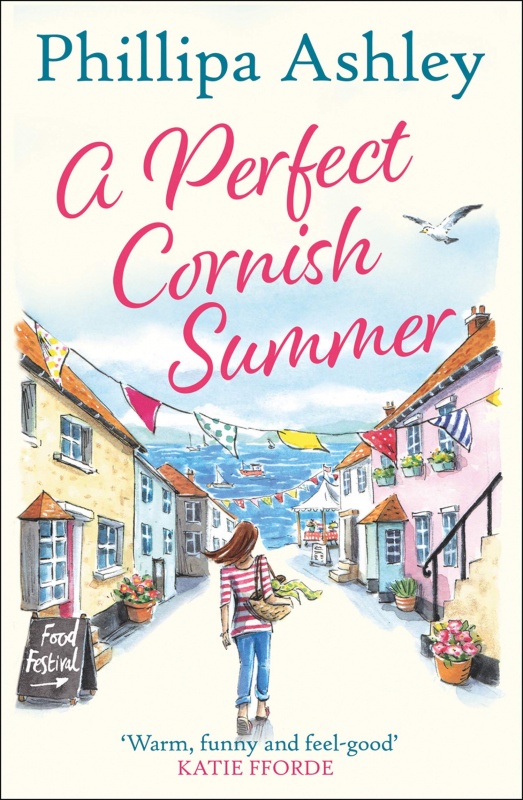 A big lovely hello to Phillipa Ashley and the blog tour for her new novel, A Perfect Cornish Summer.

Summer is on the horizon, and the people of Porthmellow are eagerly awaiting the annual food festival. At least, most of them are…

For Sam Lovell, organising the summer festival in her hometown is one of the highlights of her year. It’s not always smooth sailing, but she loves to see Porthmellow’s harbour packed with happy visitors, and being on the committee has provided a much-needed distraction from the drama in her family life (and the distinct lack of it in her love life).

When their star guest pulls out with only a few weeks to go, everyone’s delighted when a London chef who grew up locally steps in at the last minute. But Gabe Matthias is the last person Sam was expecting to see, and his return to Porthmellow will change her quiet coastal life for ever.

Phillipa has shared an extract with us today.

Bryony prodded the laminated poster with the toe of her Doc Marten’s. ‘I’d hoped you’d decided to give the festival a rest for a year.’ The dog barked again so Bryony ramped up her own volume. ‘My Sacha hates all the noise and smells.’ 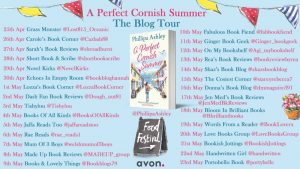 Bryony stroked Sacha’s head while Sam tried to let the words wash over her. It didn’t do to argue with Bryony, Cornwall’s self-declared canine expert and the most unlikely metal fan on the planet. Woe betide anyone who dared ques­tion her views on dogs, music . . . or the festival, or tourists, or the weather, or anything else. Sam had often thought that if Professor Stephen Hawking had ever visited Porthmellow, Bryony would have been sure to take issue with his theories on black holes. She lived in a small house not far from Wavecrest Cottage. Sam often heard Sacha barking from fifty metres away.

Spotting a rare gap in Bryony’s tirade, Sam dived in while she could. ‘Well, the festival does bring lots of people into the town who might not otherwise come. Local people and tour­ists and it’s put Porthmellow on the map as a foodie and arty haven.’

Bryony huffed. ‘Arty? The crowds are horrible and the music is trash. Sometimes I think I should close up altogether and leave town for a week.’

‘Is that a threat or a promise?’ muttered Sam, then instantly regretted taking the bait. She couldn’t afford to deliberately rile people in her position as festival chairman so she kept her tone firm but polite. ‘You know that the people spend loads of money in the galleries and other businesses while they’re at the festival,’ she said. Including yours, Sam wanted to add, knowing full well that Bryony’s Grooming Parlour did a roaring trade at festival time. Funnily enough, despite her objections to the festival, she hadn’t yet made good on her yearly threat to clear out while it was on. 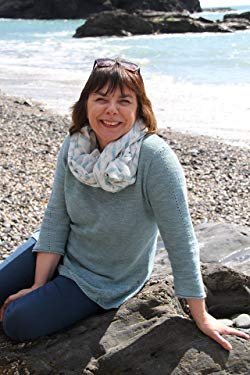 Phillipa Ashley is the author of the Amazon and Bookseller Heatseekers best-selling Cornish Cafe series. Before she became a full-time writer, she studied English at Oxford and worked as a copywriter and journalist. As Pippa Croft, Phillipa also writes as the Oxford Blue series which is published by Penguin Books.

She lives in a Staffordshire village with her husband and has a grown-up daughter. When she’s not writing, she loves falling off surf boards and following Poldark around in a camper van.

A Perfect Cornish Summer is available now as an eBook and is due for paperback release by Avon Books in May.

Ah, Spring is in the air (if you can see if past the snow) and it’s time to begin a new Cornish series from Ms Ashley. That alone should say it all.

The Queen of Cornwall (yes, that is a title) introduces us to the coastal village of Porthmellow. If you’ve been to Cornwall, then you don’t need a vivid imagination to know where you’ll be set. However, if you’ve never been to this county, then close your eyes as you read (yes, I know that’s impossible, but humour me) and you will soon smell the spray of the sea as it breaks over the harbour wall. The treks up the narrow and winding roads will become familiar and to be enjoyed.

As with her previous Cornish series, Ms Ashley fills her novel with engaging characters in beautifully written and described situations that brought forth a plethora of emotions; admiration, wonder, sadness, and breathlessness as it came to an end.

Multiple story lines run through this book, with everything coming to a head at the end in a whirlwind that was unputdownable for me. However, there are plenty of stories hinted at throughout that I am hopeful will provide the basis for the following novels with, one would hope too, plenty of scope for characters from this first to make their appearances.

To surmise, welcome back to Ms Ashley, you’ve been away too long.

My thanks to both Avon Books UK and Netgalley for the review copy.