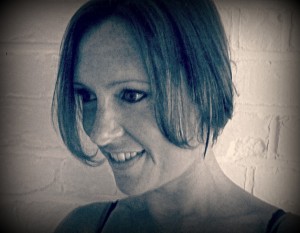 We’re excited to be a part of the blog tour for Holly Kingston’s fantastic debut novel, A Cinderella Christmas which was released by Novelicious Books in November. We’ve had a chat with Holly to find out about her new book, what she’d take to a desert island and which Sherlock she’d have over for dinner…

Can you tell us about your book, a Cinderella Christmas.

It’s a festive, fun read about a girl called Lucy, who gets the worst job in the Christmas panto. Assigned to being the back end of the comedy cow, she also has to contend with the fact that Ryan Aspall, her superstar heartthrob of a crush, is also starring in the show. Lucy tends to lose the ability to speak when Ryan’s around, which is a little irritating when she’d quite like the confidence to flirt. Then there’s diva Charmaine to contend with, the reality TV star playing Cinderella. Lucy is massively star struck by Charmaine, but Charmaine has a few secrets to hide and things aren’t quite as they seem. Lucy needs to up her confidence to improve her love life and career, but things keep going horribly wrong for the poor girl. There’s a lovely ending though, promise!

Is there a character from fiction you’d like to meet?

Great question! I’d like to meet Willy Wonka, but only if he’d let me in his chocolate factory. Oh, and I’d also like to meet Benedict Cumberbatch’s version of Sherlock, but for very different reasons. Actually, if I could investigate a crime in the chocolate factory alongside Sherlock then that would be amazing. Wait, would that make a good book?

Are you a planner?

Yes and no. My initial concept normally springs from a fun idea and characters I love, so I tend to write the first three chapters very organically. But then I’ll plan out the remaining chapters of the book, to try and get some structure in place. Not that I stick to plan though! The flippin’ characters live in my head, they natter away, and they tend to have a mind of their own half the time.

Sometimes. If I’m writing longhand then I’ll edit as I type the piece up. But I tend to scribble directly onto my laptop these days, and I think that if you stress too much about things being perfect first time round, you never get anything done! So I tend to write now and panic that it may be a load of balls later!

Which fairy tale character would you be?

Oooo can I be the Fairy Godmother please? How awesome would that be? You get a wand and a nice frock. Plus you’d be really really popular. And you get to make people happy for a living!

Which book has had the most impact in you?

Wild Swans by Jung Chang. I didn’t want to read it, but it was bought for me as a present and I LOVED it. Not only was it a fascinating, engaging story, which taught me a lot about Chinese history, but it taught me to read outside my comfort zone!

Small things! I don’t mean literally, although admittedly squirrels do make me very happy. But I am very easily entertained. The last film to really make me giggle was I Give It a Year; I really enjoyed that one. And I could watch back episodes of Friends forever.

Getting an agent was an amazing and rather giddy moment. It’s lovely to know that an industry professional thinks you can write. Not that I don’t trust my Mum’s judgement, but you know…

A really good cook! I excel at buying cake, but I’m not a natural in the kitchen. Then for sparkling wit and company, I’d invite Benedict Cumberbatch over. And erm, well actually my dining room isn’t that large … any more guests and I think the room would get a bit crowded. What with fire regulations, and health and safety … yup probably best if it were just me and Benedict. *smiles into space*

If you could swap places with someone, who would it be?

Jane Goldman. She has the most incredible career as an author and scriptwriter. She also has great hair.

What three things would you take with you to a desert island?

1) A giant vat of iced Pina Colada. 2) One of those really fancy padded sun-loungers. 3) A laptop with an antiglare screen, phenomenal Wifi range and eternal battery life (surely they’ve been invented by now). 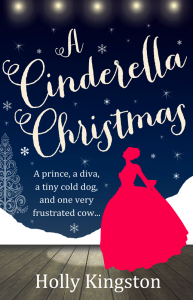 3) Not everything you write will be great. Don’t panic! Just write anything, it’s all good practice.

4) The delete key is your friend (it’s my bessy mate).

5) Turn off the internet. It’s way too easy to get distracted by videos of cute pandas!

Holly started her life as a child. When she grew substantially taller and learnt how to read, she decided that she’d jolly well like to write books. Whilst at college, Holly had a slight change in her career focus and decided to become a marine biologist. On discovering that she sucked at science and that her future job was unlikely to involve monitoring anything larger than sea plankton, Holly went back to the drawing board and got a Bsc in Psychology instead. She studied with Scriptwriting North and wrote her first film, along with a number of shorts and a sitcom pilot. After several years of writing, rewriting, and hiding stuff for posterity on her hard drive, she sent her first novel to The Marsh Agency where she is now represented by Hannah Ferguson. She is currently working on her second full length novel and wondering how to lose the weight she’s put on whilst writing her last book. Her first book, A Cinderella Christmas, is out now.