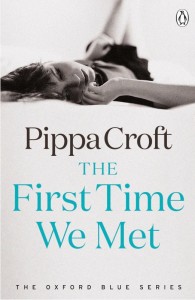 The First Time We Met by Pippa Croft is due to be published by Penguin on 13th February 2014.

The first in the Oxford Blue Series, it promises aspirational glamour alongside a steamy and captivating love story. On the eve of publication, we catch up with Pippa, to ask her about her new book, what’s currently on her desk and what we may not know about her…

The first time I fell in love, I was :

At Oxford! This may seem really lame (as Lauren might say) but I had a massive crush on a boy from my VI form but it wasn’t until I went away to university that we got together. He turned up one night very late at my room, having driven down from Manchester as a ‘surprise’. Well, I could hardly let him sleep out in the Quad, could I? And … er… Reader, I eventually married him.

You might not know this about me, but I:

Am terrified of heights. You know, the whole sweaty palms/heart racing/compelled to jump off type of terror.  I decided to go abseiling as research for my first novel and while I survived, I would never ever do it again. It didn’t help that the radio was playing ‘Don’t Fear The Reaper’ as we drove up to the rock face, but I did use the terror in the book…

When I’m feeling down, I find that I’m always cheered up by:

A phone call from my daughter, finding my husband has booked a surprise day off work or checking the surf conditions on MagicSeaweed.com (I can’t really surf but I do try very hard.)

Three things on my desk right now are:

A mini Henry vacuum for the biscuit crumbs, a Penguin Classics Great Expectations mug and a half-eaten Chocolate Hobnob.

If I could live in a book, that book would be?

My most-watched movie would have to be?

Point Break. I know, it’s sad but I just love the surfing and action sequences. (And Keanu Reeves and Patrick Swayze aren’t bad either, though I always cry when Gary Busey gets shot.)

If my house was on fire, the one thing I’d rescue would be?

Lamb and Prawn Biryani from an old Sharwoods recipe leaflet.

If an unpublished writer asked me for advice, I’d tell them…

Read a lot, hone your writing skills, find supportive but honest writing buddies and never give up going for your dream.

The one thing I wish I’d known 10 years ago is?

That my first book would be made into a movie and my tenth would be published by Penguin.

Your new book The First Time We Met explores falling for the wrong sort of guy. What inspired you to write this story? Do you think many readers will identify with Lauren?

I really hope that readers will identify with what Lauren is going through. Writing a book about young people having an amazing time at Oxford has been a dream come true. Not only has it enabled me to relive my time there, but I’ve also been able, I hope, to tap into the fears, hopes and excitement of the students who are there right now. OK, the world I’ve created is a very glamorous one – most students at College wouldn’t be able to live the kind of high end lifestyle that Alexander and Lauren can. However, both Alexander and Lauren also realise that no amount of wealth and privilege can protect them from the emotions that everyone experiences at university, at one time or another: feeling like a fish out of water, homesickness, finding your feet in an alien world and of course, falling in love. On top of that, Alexander has some extra issues to deal with arising from the loss of his mother and his job in the Army… my characters are getting a very bumpy ride indeed.

Did you do any research for The First Time We Met?

Did I do any research? Only masses!!! I’m sure I’ve driven many people insane with questions about hunting, horses, US food and drink, fashion, art, stately homes etc Although I’ve been back to Oxford and Cambridge many times and had some juicy tales from my days there, I still ‘recycled’ lots of anecdotes from my daughter and her friends who are the same age as the characters – some of them are even doing the same courses.

I definitely couldn’t have written this book without the help of my online and Real Life American friends who were a constant source of advice on language, attitudes, politics and culture – such as what would the American students eat and drink at their party? I remember one debate on Facebook that centred on the different between knickers and panties that ran to over 100 comments, and has us all RFLMAO. Once lunchtime comes around, I’m often messaging US friends who have only just crawled out of bed, to ask another question.

However, perhaps the most fun and the trickiest part of the research was finding out about Alexander’s ‘job’ in the Army – I can’t say too much about it or he’d have to kill me. I was lucky enough to bump into an old university friend at a reunion who’d been in Special Forces and knew things that made my eyes pop out. I’m very grateful to him and an author friend for their help.

What would you like for readers to take away from the book?

The thrill of riding a rollercoaster of emotion, the feeling that they’ve actually been on the whole sexy, maddening, exciting journey with Lauren and Alexander. Plus a desperate need to read the next book in the series…. I’m not asking much, am I?

Describe a typical day spent writing. Do you have any unusual writing habits?

I keep office hours – ish. Normally I try to get up quite early and get a good chunk of writing done while I’m still in my pyjamas. I then carry on working until lunch. I’m not very brain-lively in the afternoon so I try to get out of the house to go to the gym, or for a swim or shopping. Then I do more work, or editing or marketing in the evening. I’m also on Twitter and Facebook on and off all day.

The First Time We Met by Pippa Croft will be released tomorrow and is available for pre-order now in Paperback and E-book.

The blurb for The First Time We Met:

When US Senator’s daughter, Lauren Cusack, arrives at the enchanting Wyckham College of Oxford University she hopes to mend a broken heart by throwing herself in to her studies. But then the English aristocrat Alexander Hunt walks in to her life and everything changes. Handsome, brooding and with his own dark past to escape, Alexander is exactly what Lauren doesn’t need – but she finds herself helplessly drawn towards him. They are attracted to one another with an intensity that should warn them that neither is what the other needs. But sometimes desire is too powerful to ignore….