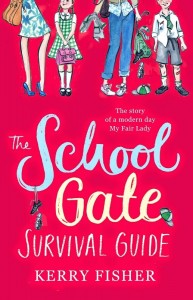 The School Gate Survival Guide was first published as The Class Ceiling. It’s now got its new titile as was released as an e-book by Avon earlier this month with the paperback release following later in the year. We were very pleased to be invited to take part in Kerry’s blog tour to celebrate the release of her new book.

Below is an extract from the book. Enjoy.

Until today, when this solicitor bod burst into my morning with the sort of booming confidence it would be impossible to argue against. My ears closed down, rejecting the steamroller voice, pushing away his words.

‘I’m sorry to be the bearer of ghastly news.’

I’d just got home from my worst job cleaning the changing rooms at Surrey’s grottiest leisure centre. The phone rang while I was in the shower scrubbing away the taint of old plasters and plughole cack. As I clumped down the stairs wrapped in a towel that barely covered my backside, I was praying that the call was from Colin, with good news about work. Instead I stood in the kitchen, holding the phone away from my ear so I didn’t drip water into the receiver while Mr William Lah-di-dah bellowed away at a slight distance, a sort of old Etonian-cum-Clanger. Then I heard it.

I pressed the phone into my forehead as I tried to take in the fact that my favourite – and best paying – customer had died. My oddball ally, with her outrageous old lady comments and bursts of unexpected kindness, had gone. I hadn’t even said goodbye. Froths of shampoo seeped out from under my towel turban and mingled with the sting in my eyes.

‘Mrs Etxeleku? Are you still there?’

‘Yes, I’m still here.’ I couldn’t be bothered to correct him. I’m not a Mrs. I’d given up waiting for Colin to pop the question. And my surname is pronounced Ech-eleku, not Et-zeleku. If only my father had hung around long enough for me to be born, I could have had a nice English name – Windsor, Jones, even Sidebottom – on my birth certificate, rather than the blank that made my mother clamp her mouth shut like a Venus Flytrap every time I tried to discuss it. Instead I’ve spent thirty-six years lumbered with a Basque surname no one can pronounce.

‘How did she die?’ I heard a wobble in my voice. I leant against the wall, the chilly December draught blowing under the back door, licking around my wet knees.

‘Yes, she managed to call an ambulance but she was dead by the time they reached her.’

He sounded as though he was discussing an order for a Chinese takeaway. I was obviously just a number on his neatly typed list of people to phone, a nobody, someone he needed to stop turning up for work. He paused. I imagined him sitting behind a heavy wooden desk, glancing down the page to see who came after ‘cleaner’. The idea that someone who spent her life wiping globs of toothpaste off sinks could be friends with someone who spent hers debating Kafka wouldn’t have crossed his mind. I started clattering about, throwing dirty cereal bowls into the sink and hurling trainers and football boots into a heap by the back door. I had no claim on Rose Stainton. I was just the woman with the mop, the skivvy who washed out the kitchen bin.

‘Anyway, part of the reason I’m calling is that her solicitor would like to see you,’ he said.