Hi Martine. I am so pleased to be welcoming you to Novel Kicks today. Would you tell us a little about your book, Narcissism for Beginners and how the idea originated?

Hi Laura. Some years ago I became fascinated by extremely narcissistic characters and their modus operandi, particularly those who set themselves up as gurus and ‘spiritual’ leaders, and wanted to explore the effect they have on those people closest to them.

Ubiquitous. Hard to say why, it’s just a really satisfying word to say. There are very few words with that qu sound in the middle preceded and followed by the i sound, so maybe that’s it. Also, it makes you sound clever.

What’s your typical writing day like – do you have any writing rituals etc?

Unfortunately there’s no such thing as a typical writing day as my job takes up most of my time and I rarely stay in one place for longer than a week, so at the moment writing has to be done whenever and wherever I can fit it in. There’s always tea though, that’s a given, and sometimes coffee made with cream.

Did you plan much prior to writing your novel? Do you think it’s better to wait for a complete first draft before editing?

This novel has seven different narrative voices so I needed to do some planning to make sure I didn’t get into a complete muddle. I know not everyone does, but I always write a first draft in longhand from start to finish before I do any rewriting. I think it takes at least one draft to work out which story I actually want to tell.

What’s the best and most challenging thing about being a writer?

Well, the best and the most challenging are definitely not one and the same. The worst is trying to balance being a writer with earning a living; writing always seems to lose that particular fight in my experience.

But the best aspects of writing are almost endless. Writing presents an opportunity to always be learning something new, in terms of skill and technique of course, but also when it comes to researching new ideas and subjects you never even knew you were interested in. I love the start of a new project when you’re like a kitten chasing after balls of wool rolling off in all directions.

It’s important to make sure all the basic elements are sound: credibility, suspense, depth of character and character interaction, consistency in terms of timeline, tense and point of view; these are the foundations a good novel needs to be built on in my opinion. 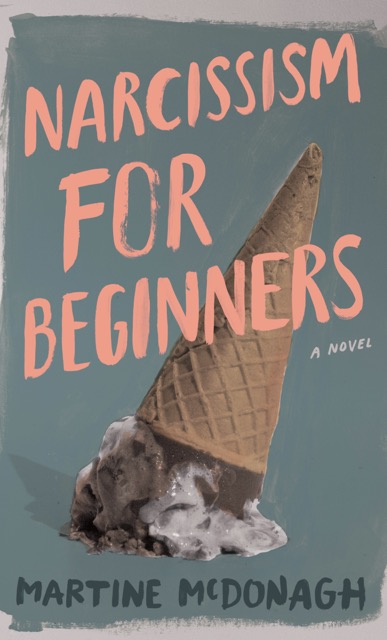 If you were only allowed to own three books, which three would you have and why?

Hmm, tricky. When you say own, does this mean I could still borrow from the library? Marcel Proust, In Search of Lost Time (all in one volume if that’s not cheating), James Joyce, Ulysses and The Oxford Classical Dictionary. Mainly because they are each a library unto themselves and probably enough to keep me going for the rest of my life.

Who’s your favourite fictional character? What is it about them you like?

I think it has to be Nelly Dean in Wuthering Heights, a vastly underestimated character in terms of how much power she has over the story she’s telling in that novel.

Can you tell me about what you’re working on at the moment?

I have a few things on the go: a short story that I want to submit to a competition; the second draft of a novel – a sequel to Narcissism for Beginners set 25 years on from the first story, and I’ve started researching the novel to come after that, about which it’s too early to say anything.

What’s your advice to someone who wants to write a novel?

Write and keep writing – and learn from what you read.

Martine McDonagh’s novel, Narcissism for Beginners, was long listed for the 2017 Guardian Not The Booker Prize. Her first novel, I Have Waited and You Have Come, was described as ‘cataclysmically brilliant’ by author Elizabeth Haynes, and praised in The Guardian and Red magazine.

Martine worked in the music industry for 30 years, managing James, Fujiya & Miyagi and other bands, and is now programme leader on the Creative Writing & Publishing MA at West Dean College in Sussex.

For more information about Martine, visit her website: http://www.martinemcdonagh.com

Narcissism For Beginners was published in March 2017 by Unbound and is available in most UK shops and online.