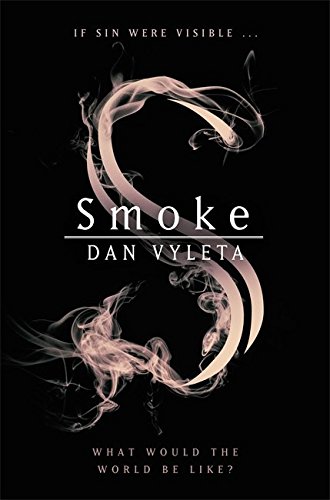 Smoke opens in a private boarding school near Oxford, but history has not followed the path known to us. In this other past, sin appears as smoke on the body and soot on the clothes. Children are born carrying the seeds of evil within them. The ruling elite have learned to control their desires and contain their sin. They are spotless. It is within the closeted world of this school that the sons of the wealthy and well-connected are trained as future leaders.

Among their number are two boys, Thomas and Charlie. On a trip to London, a forbidden city shrouded in smoke and darkness, the boys will witness an event that will make them question everything they have been told about the past. For there is more to the world of smoke, soot and ash than meets the eye and there are those who will stop at nothing to protect it . . .

Imagine a world where sin were rendered visible by smoke; where evidence of your deeds and intents was visible for all to see. Large cities like London are hives of sin and corruption, wrapped in smoke and stained with soot, where the common people are forced to live in the thick of it while the very wealthy move out into the countryside away from the corruption and into the fresh air where their own smoke can dissipate.

The children of the wealthy are schooled in how to be mindful of their thoughts and actions so as not to smoke and it is in once such school that  the story starts.

Thomas is a young boy who until very recently was home schooled, until a powerful sponsor secured his place at a well-respected school outside of Oxford. On a school trip into London to observe the sinful city Thomas sees something which causes him to question the true nature of smoke.

The first thing I noticed was that the writing had an older feel to it and by that I mean that they style felt older, rather than it had an old voice. This style worked perfectly given that the book is set in an alternative recent past. The characters are believable and well-formed but I got the impression that some of them may have fallen foul of editing as they felt as if they should have had a bigger part and perhaps it was cut. The pacing of the book was, I felt, a little inconsistent – the first part moved quite slowly, then it sped up into the middle before becoming a touch tangled in the end.

All in all it was a good book. The premise was interesting and overall I enjoyed it but it left me wanting more as the end felt a bit off. I know that is vague, but I cannot put words to it beyond the fact that the end just didn’t quite work.

(Smoke was released by W&N on 7th July 2016. We thank them for the advanced review copy in exchange for an honest review.)