I can’t believe we are almost in the middle of August already. Time is really flying. I thought it was time for another book haul. I’ve been sent or brought some great books over the last month and here are six of the ones I am looking forward to reading and six books where I love the covers. 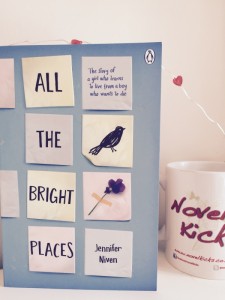 All The Bright Places by Jennifer Niven (Penguin, 8th January 2015.)

I have heard so many good things about this book. It’s been recommended on You Tube as well as friends who have read it and said that it’s good. It’s a book I’ve been looking at for a while and so I brought it. The premise of it sounds interesting and relatable in that it deals with mental health. I am really interested and itching to read this book. The cover is pretty too. It’s due to be made into a film so I want to read it before it’s released.

Theodore Finch is fascinated by death, and he constantly thinks of ways he might kill himself. But each time, something good, no matter how small, stops him.

Violet Markey lives for the future, counting the days until graduation, when she can escape her Indiana town and her aching grief in the wake of her sister’s recent death.

When Finch and Violet meet on the ledge of the bell tower at school, it’s unclear who saves whom. And when they pair up on a project to discover the ‘natural wonders’ of their state, both Finch and Violet make more important discoveries: It’s only with Violet that Finch can be himself – a weird, funny, live-out-loud guy who’s not such a freak after all. And it’s only with Finch that Violet can forget to count away the days and start living them. But as Violet’s world grows, Finch’s begins to shrink. How far will Violet go to save the boy she has come to love? 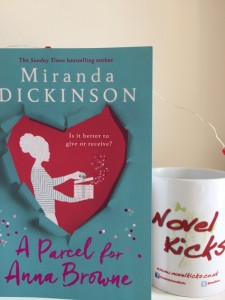 The next book is one I’ve been sent for review and it’s A Parcel for Anna Browne by Miranda Dickinson. First of all, I love, love, love this cover. It’s so pretty. I read Miranda’s last novel, I’ll Take New York and I really enjoyed it so I am looking forward to reading this one which is due to be released in September. The plot for the novel sounds so good and right up my street.

Anna Browne is an ordinary woman living an ordinary life. Her day job as a receptionist in bustling London isn’t exactly her dream, yet she has everything she wants. But someone thinks Anna Browne deserves more . . .

When a parcel addressed to Anna Browne arrives, she has no idea who has sent it. Inside she finds a beautiful gift – one that is designed to be seen. And so begins a series of incredible deliveries, each one bringing Anna further out of the shadows and encouraging her to become the woman she was destined to be. As Anna grows in confidence, others begin to notice her – and her life starts to change.

But who is sending the mysterious gifts, and why? 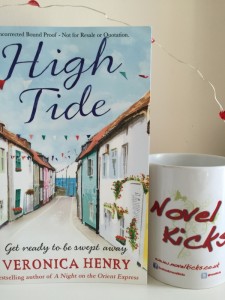 Also due for release in September and sent to me for review is High Tide by Veronica Henry. This is another cover I am in love with and the plot of this sounds great. This book arrived from the publishers with a small and very cute message in a bottle.

Pennfleet might be a small town, but there’s never a dull moment in its narrow winding streets …

Kate has only planned a flying visit to clear out the family home after the death of her mother. When she finds an anonymous letter, she is drawn back into her own past.

Single dad Sam is juggling his deli and two lively teenagers, so romance is the last thing on his mind. Then Cupid fires an unexpected arrow – but what will his children think?

Nathan Fisher is happy with his lot, running picnic cruises up and down the river, but kissing the widow of the richest man in Pennfleet has disastrous consequences.

Vanessa knows what she has done is unseemly for a widow, but it’s the most fun she’s had for years. Must she always be on her best behaviour? 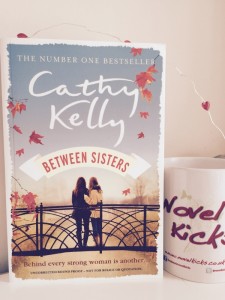 What is it with all these beautiful covers. This book was sent to me for review by Orion and is due to be released in October. It Started in Paris was such a lovely book so I am excited to read this next one from Cathy Kelly.

Cassie has spent her married life doing everything right – making sure her children have the perfect life, being a devoted wife and a dutiful daughter-in-law. Although it’s left her so exhausted that ‘wine o’clock’ comes a little earlier each afternoon . . .

Her sister Coco runs a vintage dress shop and has shied away from commitment over the years. Coco believes men complicate things, and she’s got enough to contend with. Until a face from her past returns.

Watching over them is grandmother Pearl, tucked away in her little house in Delaney Square. But something is keeping her awake at night. Was she right to do what she did all those years ago?

And then there’s Elsa, the polished face of daytime TV, who’s battled demons of her own in the past and come out on top. Now Elsa faces one final fight – but it will require more bravery than anything which has come before. 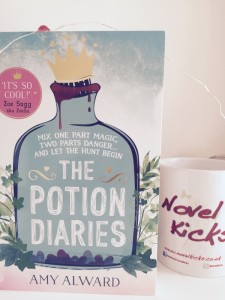 I’ve been trying to read more young adult (and for the most part enjoyed it, Red Queen, The Fault in Our Stars etc.) The idea for this book just sounds brilliant and I am excited to read it. I keep spotting it on my TBR shelf and there have been a couple of times where I’ve neatly pushed it up the list but so far, I’ve resisted but I am not sure for much longer. After hearing about it on You Tube, it sounded too good not to buy (oh and yes, of course, I adore this cover.)

When the Princess of Nova accidentally poisons herself with a love potion meant for her crush, she falls crown-over-heels in love with her own reflection. Oops. A nationwide hunt is called to find the cure, with competitors travelling the world for the rarest ingredients, deep in magical forests and frozen tundras, facing death at every turn. Enter Samantha Kemi – an ordinary girl with an extraordinary talent. Sam’s family were once the most respected alchemists in the kingdom, but they’ve fallen on hard times, and winning the hunt would save their reputation. But can Sam really compete with the dazzling powers of the ZoroAster megapharma company? Just how close is Sam willing to get to Zain Aster, her dashing former classmate and enemy, in the meantime? And just to add to the pressure, this quest is ALL OVER social media. And the world news. No big deal, then. 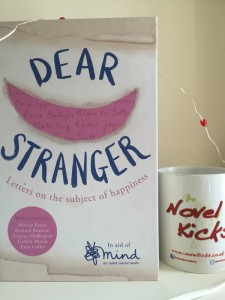 I am not sure how I came across this book but it’s one that I made my mission to buy once it was released. It’s non-fiction but the premise of it sounds like it could be very interesting. It’s a collection of letters from authors, bloggers and Mind ambassadors. It’s in aid of the charity, Mind and it’s a glimpse into different interpretations of happiness and at least £3 of every book sold goes to Mind so it was all the more reason for me to buy it. Contributors include Matt Haig, Rowan Coleman, Caitlin Moran, Eion Colfer and Marian Keyes amongst others.

Dear Stranger is a collection of inspirational, honest and heartfelt letters from authors, bloggers and Mind ambassadors to an imagined stranger. Insightful and uplifting, Dear Stranger is a humbling glimpse into different interpretations of happiness, and how despite sometimes seeming unobtainable happiness can, in the smallest of ways, become and achievable goal.