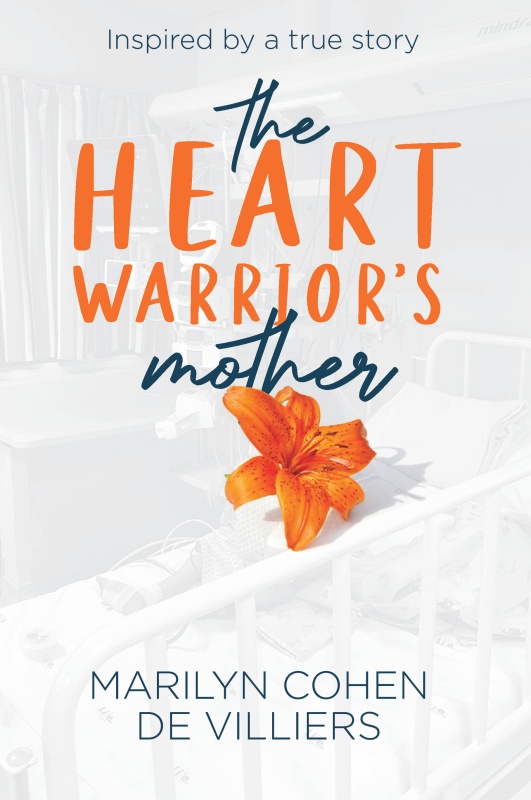 I am pleased to be welcoming Marilyn Cohen de Villiers to Novel Kicks. She’s here with the blog tour for her book, The Heart Warrior’s Mother.

Kerry-Anne Aarons is over the moon. She and her husband, Imran Patel, are about to become the parents of a baby daughter, and give their son, Leo, an adored little sister.  It wasn’t planned, but Kerry knows that Lily’s arrival will complete the perfect little family she has always wanted. She, Imran and their two children are going to live happily ever after…

Lily is born with a serious congenital heart defect and Kerry’s battle to save her daughter commences. It’s a battle that takes her from the operating theatres and Intensive Care Units of local hospitals to the High Court of South Africa. It’s a battle that strains her relationships with her friends, her parents, and – ultimately – her husband.  It’s a battle she is determined to win.

But how much will Kerry have to sacrifice to give Lily the future she deserves?

“A true, cross-generational story of the eternal link between love and pain… the greater the love, the more inevitable the pain. Marilyn Cohen de Villiers once again – with amazing skill – depicts the common humanity that transcends differing cultures.”

A  percentage of the proceeds of this novel will be donated to the Children’s Cardiac Foundation of Africa, an organisation that funds lifesaving heart surgery for children across the continent.

This was not an easy book to read. It took me through a large rollercoaster of emotions and, I feel that, if you’ve lost a child, whether it be to miscarriage or illness post birth, be prepared as this novel deals with some very difficult issues.

It however does this with extreme sensitivity and knowledge. There was a feeling that the author had really researched her subject matter and this adds a lot to the novel. To also know that this was based on a true story makes it all the more heart breaking.

From the beginning, you really do feel for Kerry and Imran – to have to see a child going through so much from birth. I turned every page hoping that things would turn around – that everything will be ok.

Kerry is a very strong character, even if, at times, she doesn’t feel it. I don’t know how I would cope seeing a child, let alone mine if I had one, in that much pain and discomfort.

I started off liking Imran. He seemed very supportive despite his own pain. As the novel progressed, my opinion of him did vary. I grew frustrated with his behaviour. However, things become clear when you begin to see things from his point of view. He was also Lily’s parent. There was a lot of pressure on him and influences from outside sources. I did gain better understanding of why he was acting in a particular manner.

I adored Leo and how well he adjusted to his home life and to Lily.

Gillian was the only character I really couldn’t warm to. I’ll leave it there and let you make your own mind up about her.

The plot moves well and the author does well to incorporate medical speak and then breaking it down into something more understandable for non medical trained readers. 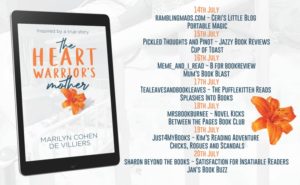 Kerry and Imran are constantly in and out of hospital with their baby and this adds to the feeling of despair and fear the characters are experiencing.

This story covers many themes. It explores not only Lily’s illness but what affect this has on her family and beyond. Living with something of this magnitude will test the strongest couple to their limits and this is explored well.

What happens to Kerry, Imran, Leo and Lily? Well, I’m not telling. It’s something I hope you’ll find out for yourself.

Yes, this book is hard going in many places but there are the occasional light moments too. Most importantly, hope and faith run right to the bones of this novel.

It also made me even more extremely grateful for our NHS and the people who keep it going, despite the difficulties it faces every day.

Marilyn Cohen de Villiers, in my opinion, has succeeded in writing a wonderful novel out of a heartbreaking circumstance. It’s definitely a ‘pull at your heart strings’ book. I suggest you have a packet of tissues on standby. 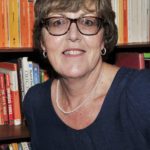 I was born and raised in Johannesburg, South Africa, the youngest daughter of an extraordinarily ordinary, happy, stable, traditional (rather than observant) Jewish family. After matriculating at Northview High School, I went to Rhodes University in Grahamstown where I served on the Student’s Representative Council (SRC), competed (badly) in synchronised swimming and completed a B. Journalism degree. This was followed by a “totally useless” – according to my parents – English Honours degree (first class), also at Rhodes.

With the dawning of the turbulent 1980s, I started my career as a reporter on a daily newspaper, working first in the news and later, the finance departments. During this period, I interviewed, among others, Frank Sinatra, Jeffrey Archer, Eugene Terre’blanche and Desmond Tutu. I caught crocodiles; avoided rocks and tear smoke canisters in various South African townships as protests and unrest against the Apartheid government intensified; stayed awake through interminable city council meetings and criminal and civil court cases – and learned to interpret balance sheets.

I also married my news editor, Poen de Villiers. Despite all the odds against us coming as we did from totally different backgrounds, we remained happily married for 32 years and three days. Poen passed away as a result of diabetes complications on 15 March, 2015.

After the birth of our two daughters, I ‘crossed over’ into Public Relations with its regular hours and predictability. My writing – articles, media releases, opinion and thought leadership pieces and so on – was published regularly in newspapers and other media, usually under someone else’s by-line. I returned to my roots as a journalist in a freelance capacity some six years ago, writing mainly business and IT articles.

So why, after a lifetime of writing non-fiction, did I decide to try my hand at fiction?

The catalyst was the unexpected death of a childhood friend and colleague in 2012. This spurred me to take stock of my life, to think about what I had achieved. A few months later, I decided to try and write a novel. This turned out to be A Beautiful Family which was published in July 2014. The fiction bug had bitten, and my second novel, When Time Fails, was launched in September 2015, followed by  Deceive and Defend, in 2018. Although this was not intended when I first started writing fiction, the three novels together constitute The Silverman Saga trilogy

Unlike my earlier novels, my latest book, The Heart Warrior’s Mother, was inspired by a true story.

Click to buy A Heart Warrior’s Mother at Amazon UK and Amazon US.