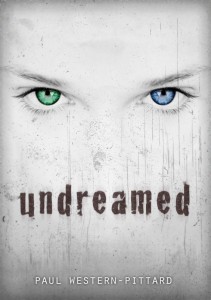 Undreamed is a dark psychological thriller that tells the tale of Alice, a woman trapped between reality and a dream.

Alice is trapped in a nightmare. She leads two lives, both real to her, both flawless in their logic and texture, both filled with people that she loves and hates. One of these is a dream. She has no way of knowing which. A borderline junkie-heiress in Manhattan, or a recovering psych patient in Sydney, when Alice sleeps in one life, she wakes into the other.

Other than her own memory of them, her worlds are separate and seamless. In both her lives she tries to find clues to discover the root of her sickness, but nothing crosses over. She may as well be two completely different people. Caught in this impossible status quo, never able to bring herself to believe that the life she’s leading is true, Alice is trapped. Not believing either, she believes nothing. Then one day, her lives are fractured when something does cross over. First in Sydney then Manhattan, Alice meets a girl dressed in green. She knows this girl for what she is: the key to her escape. But as she unravels the girl’s secret, the realities of not one but both lives are challenged.

The question becomes: who is it that she’s really waking?

I had a few things planned for the day I started this, but once I read the first few pages, I had to put them on hold, because I couldn’t put it down. Literally. I started it in the morning, and other than eating and a pathetic attempt at cleaning the flat (for a viewing, oops), I read it until I finished it. It’s brilliant.

Each of Alice’s lives are so real you switch, with her, believing one, then the other, then back to the first is real. There’s so much detail in each, how could either be just a dream? Was this in fact some kind of fantasy/sci-fi novel where they are both real, but connected somehow? Or was one really a dream? Or could they both be a dream?

The story is told alternating chapter by chapter between New York Alice and Australian Alice. They’re told first person, present tense, which I love, because it means the read goes on the same path as the narrator. With each chapter, I changed who I hoped was real and who was a dream.

As the book progressed, I kept trying to guess what was going on, with crazy, out there ideas. None competed with the truth, which slowly, slowly comes to Alice.

The truth is chilling, but brilliant, and makes everything make sense. I’m tempted to read it again, knowing the truth, to see if there are hints throughout.

One Response to Undreamed by Paul Western-Pittard