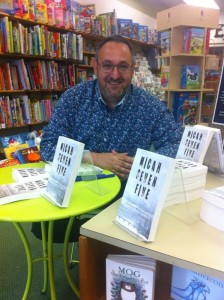 Hello Howard, thank you for joining us. First, could you tell us about your route to publication?

It’s such a complicated route for most writers that sometimes I feel like I need a sat-nav to get there. I self-published my first book and was fortunate that Micah Seven Five was picked up by a great little independent press, Inspired Quill. It’s really tough without an agent and finding an agent is really tough because most publishers won’t even look at submissions unless they’re from an agent. It’s like trying to break into a very closed shop. I have so many emails being very positive about my writing but saying they’re just not in a position to take things forward. So each book needs to be pitched from scratch, which is both time-consuming and, at times, a bit soul-destroying especially when the emails come back so quickly, you just know they’ve not even been read. Hopefully, somebody will pick up the new one; we’ll see. So the answer is there’s no easy route – you have to just keep banging on doors.

Empire Of The Sun by JG Ballard, The Five People You Meet In Heaven by Mitch Albom and Charlie & The Chocolate Factory by Roald Dahl

Are you much of a planner and do you edit as you go?

I’ve tried being very planned and very unplanned and my favourite way of working is somewhere between the two. I like to have a general route map of where I’m going and how I’m going to get there but then I like the freedom to change as I write or to move off into slightly unforeseen directions. I tend to write everything and then go back and edit quite severely afterwards. I usually do two or three redrafts.

Given that a lot of my planning involves people-watching and looking at folks on the underground and wondering what is going on in their lives at any particular time, I guess the ability to mind read could be useful and interesting when it comes to creating plots and building characters.

Serendipitous – I like the idea of positive things happening by chance. I just haven’t had the opportunity to use it yet in my writing….but I will!

Is there a fictional character you’d like to have a beer with? What would you talk about?

That’s a tough one. I like dark characters, flawed characters because I think we are all flawed and they tend to be the most realistic. I also think the issues that affect them are common across time periods – people still grapple with the same problems today, albeit in different circumstances, that they did then. So, although I’m not sure a beer would be in his best interests, a conversation with Michael Henchard from The Mayor of Casterbridge about his fall from grace and what he could have done at different stages to prevent his own demise would be interesting. Nobody draws flawed characters as well as some of the classic authors, like Hardy and Dickens. 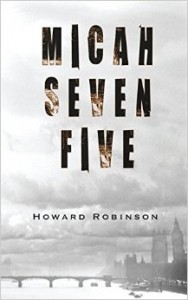 Not rituals as such but because like many writers I have a full-time job, I wrote around 85% of my most recently completed manuscript on my iPhone on the train. I’m now writing a follow-up to Micah Seven Five and have found it much harder to try and go back to writing on my laptop so, back to the phone it is.

Which author do you admire?

So so many and for lots of different reasons that it’s difficult to single out one. Roald Dahl and JK Rowling for their sheer imagination and ability to transport you to whole new magical worlds; Dickens for his characters. However, I read The Absolutionist by John Boyne last year and he seems incapable of writing anything that isn’t both moving and fantastic.

Your advice to new writers?

1. Write something that you would want to read. Don’t try and write something because you want it to be commercially successful, just write the best story you can. If you do, chance’s are more people will like that than you think.

2. Do your research. If I’m describing a setting then I need to actually find a place, go there if possible and look around and record as much detail as possible so that what I convey rings true to the reader. I’ve done it with a council estate in south-east London in my first book The Bitterest Pill and a cafe in North London in Micah Seven Five. The manuscript I have recently finished was set substantially in France and I didn’t have the time to travel over so I spent hours on Google Earth’s street view walking around certain towns and cities to ensure I captured the setting properly.

3. Just write. Just sit down, have your idea in your mind and just write. It doesn’t have to be perfect because you will have plenty of time to hone and revise whatever it is your write, but just do it. We can find so many reasons not to start that there’s really no substitution for just jumping in. And don’t put yourself under too much pressure to finish within a certain timeframe. Enjoy the experience and journey of writing because ultimately I find it more satisfying than finishing. 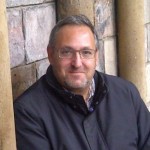 In his writing, Howard Robinson enjoys taking ordinary people and placing them in extraordinary situations and playing around with the way they would respond. He started writing almost as soon as he was able to.  His Modern History degree taught him the importance of structure in writing and of exploring language and his 25 year career in PR has given him the opportunity to write on the broadest possible range of subjects. Essentially, Howard says he writes for himself. He tries to create stories he would enjoy reading, to explore situations and emotions safely within the confines of the page. He aims to create worlds and characters with whom readers can identify and sympathise. He lives in London with his wife and two children.