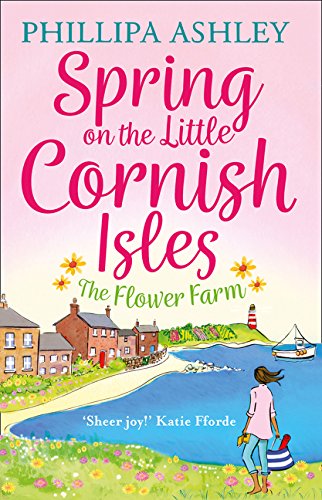 Jess has lived at the idyllic flower farm on the Isles of Scilly her whole life, but when her boyfriend Adam leaves without explanation, Jess discovers that even her little slice of Cornish heaven can be lonely.

For the first time in Will’s life, he’s met someone he can’t stop thinking about. But nothing is simple when the woman of your dreams is working for you.

Gaby is running away from painful memories, and where could be more perfect than a remote island off the Cornish coast? But to put the past behind her, she must keep moving … however much she might want to stay.

Here we are with the second book of Phillipa Ashley’s second series to be set around Cornwall, in this case, we are based on the Scilly Isles, the Cornish Isles of the title. For this title, we focus on Jess and Will who run the Flower Farm of the title. Twins whom we met in Book 1, both were obligated to give up growing up dreams when their father ran off and so have made the best of the situation to run a very successful business. Despite the normal sibling arguments, both are devoted to the farm and each other.

Basic rundown – Jess is dumped by Adam, the man she hoped to marry whilst Will’s world is turned upside down by the arrival from the mainland of a whirling dervish of a lady, Gaby, who is hiding demons in her own life she’s trying to work through, that he fights so hard to resist. The path of true love can never run smooth in stories (or they’d be very short), such is the case here as we follow the twins fencing with their prospective partners, with Jess being wooed by a visiting businessman. Characters from the first book in the series, especially Jess’ best friend Maisie crop up through this story, nicely linking the series.

You can read this as a standalone, but personally, I would advise to have read, Spring on the Little Cornish Isles: The Driftwood Inn first. You won’t lose anything if you don’t, but you’d miss the little snippets the author drops through this book that refer back. If you want to know more of the story, please buy the book, as I don’t want to give away any surprises – you’ll thank me for it.

Ms Ashley is a true queen of writing that makes you fall in love with a location that you’ve never been to. Together with her Cornish Café series (source this series!), she should be employed by the region for promotional services. Flowers, beautiful locations, gig races and wonderfully written characters, I count this author as one I should like to aspire to be near the same quality, a simply wonderful addition to her body of work.

(Spring on the Little Cornish Isles: The Flower Farm was released in April by Avon and is available to buy in most UK book shops and online. Click to view on Amazon UK.)