Review: The Long Earth by Terry Pratchett and Stephen Baxter 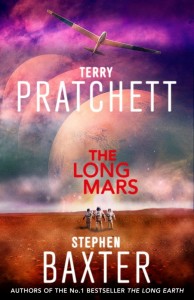 The Long Mars was released by Doubleday, June 2014.

2040-2045: In the years after the cataclysmic Yellowstone eruption there is massive economic dislocation as populations flee Datum Earth to myriad Long Earth worlds. Sally, Joshua, and Lobsang are all involved in this perilous work when, out of the blue, Sally is contacted by her long-vanished father and inventor of the original Stepper device, Willis Linsay. He tells her he is planning a fantastic voyage across the Long Mars and wants her to accompany him. But Sally soon learns that Willis has ulterior motives …

Meanwhile U. S. Navy Commander Maggie Kauffman has embarked on an incredible journey of her own, leading an expedition to the outer limits of the far Long Earth.

For Joshua, the crisis he faces is much closer to home. He becomes embroiled in the plight of the Next: the super-bright post-humans who are beginning to emerge from their ‘long childhood’ in the community called Happy Landings, located deep in the Long Earth. Ignorance and fear are causing ‘normal’ human society to turn against the Next – and a dramatic showdown seems inevitable . . .

The Long Mars is the third instalment of the Long Earth series by Terry Pratchett and Stephen Baxter.

It’s set several years after the second book. A general summary of the story is that, following a massive natural disaster on Datum earth, there is a mass relocation of people out into the stepwise worlds. It follows three main story arcs, the first is a long distance trek into the far reaches of the long earth, another across Mars and a third one to find an emerging breed of humans who exhibit intelligence far superior to our own.

Having read the previous two novels, I suggest that you read the other books first, this definitely doesn’t stand on its own and won’t make sense unless you have read the first two in the series.

The book is very easy to read  with the sharp edges of Sci-Fi rounded off by Terry Pratchett’s inventive fantasy and sly humour so it will appeal to both Sci-fi readers and fans of the Discworld. It was great to reconnect with the characters and to find out what progress they had made.

On the whole I like this book, but I did feel it lacked a conclusion. It definitely feels like part of a series as it leaves several questions unanswered. I eagerly await the next one to find out what happens next.