The Goldfinch is a story of loss, obsession, survival and self-invention. 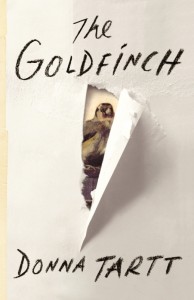 Aged thirteen, Theo Decker, son of a devoted mother and a reckless, largely absent father, survives an accident that otherwise tears his life apart. Alone and rudderless in New York, he is taken in by the family of a wealthy friend. He is tormented by an unbearable longing for his mother, and down the years clings to the thing that most reminds him of her: a small, strangely captivating painting that ultimately draws him into the criminal underworld. As he grows up, Theo learns to glide between the drawing rooms of the rich and the dusty antiques store where he works. He is alienated and in love – and his talisman, the painting, places him at the centre of a narrowing, ever more dangerous circle.

This was my ‘real life’ (as in not on NK) book club book in February. Usually one person suggests three or four novels, and the group votes their favourite. In January one of our members was raving about The Goldfinch, so we decided we’d skip the vote and just read this.

Four of us went to the meeting in March. Two of us loved it, two of us just couldn’t decide about it. I was one of the later.

I’m torn on my feelings about it. Some parts of it were so descriptive and in-depth I felt I was there and loved it – but then others felt boring and un-necessary. Certain parts flew by, whereas others dragged.

It’s a very powerful book. The incident where Theo’s mum died (I’m not going to give it away) has stuck with me, the detail was so descriptive and brilliant. I felt like I was there (unfortunately).

The other member that wasn’t sure about it said she thought it could be half the length (it is a very long book), and it would massively improve it.

Would I recommend it? I don’t know. I’m definitely going to read other books by Donna Tartt, and because other members of the club enjoyed it, I think I would. Maybe I just didn’t get it.