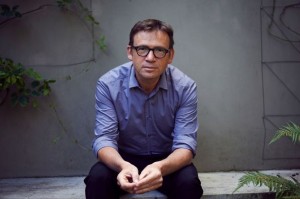 I was very excited to hear that David Nichols was returning to his home town to host ‘An audience with.’ I was very fortunate to be able to attend this recent event at The Point in Eastleigh, Hampshire (In association with Eastleigh Library 25th Anniversary events.)

When we arrived, we promptly found our seats in the main auditorium. I have to admit, I didn’t quite know what to expect. I had never been to The Point before despite having lived near Eastleigh for nearly two years. I have quickly become a fan of the venue. It’s big enough to not feel cramped and small enough that I didn’t feel a million miles from the stage area where two chairs and a table had been placed in the middle.

To begin with, David talked about how Libraries play a huge part for him and how he will often find himself writing in the British Library as well as the London Library. He then chatted about his time in theatre and how through working there he found his love of words. 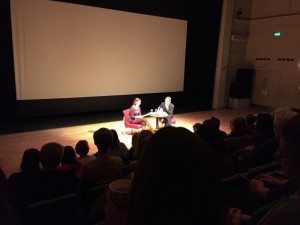 He spoke about his career as a screenwriter (I loved The 7.39 and I have only recently realised that David wrote my favourite episode of Cold Feet,) and how, one evening when he was making notes whilst watching University Challenge, he discovered he had the basis of his first novel, Starter for Ten.

David shared how he approaches each novel – planning and research prior to beginning a book. As someone who would love to finish writing her first novel at some point in the future, I found David talking about his experiences as a screenwriter and novelist fascinating (how he feels there is more control over a novel than a screenplay,) and I found it  interesting when he spoke about the differences between the two. For example, how in a novel you can just say “it began to rain,”when in a screenplay, this line would involve a £40,000 rain machine. I now have a whole new appreciation for ‘movie rain.’ 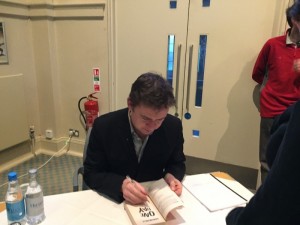 David also spoke about how his experience in theatre provided inspiration for his novel, The Understudy before moving onto his novel, One Day and the subsequent movie adapation as well as the inspiration behind the story – the idea of only seeing one day each year and the audience filling in the other 364 days.

He read from his new novel, US (which I can’t wait to read,) before finishing off with a Q&A from the audience.

There was also a chance to briefly meet David who was very lovely. This was followed by a screening of One Day to finish off the afternoon.

I left the event clutching my signed copy of One Day feeling very inspired and happy that I attended such a great event. Thank you to David and The Point for a lovely afternoon.

(Us was released by Hodder & Stoughton on 30th September 2014. It’s available in most UK bookshops and is also available as an e-book.)