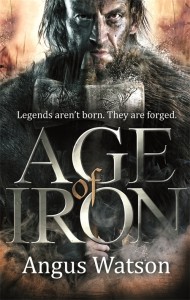 Age of Iron by Angus Watson.

Dug Sealskinner is a work-shy mercenary traveling south to join up with King Zadar’s army. But he keeps rescuing the wrong people.

Now Dug’s on the wrong side of the thousands-strong army he hoped to join – and worse, Zadar has blood­thirsty druid magic on his side. All Dug has is his war hammer, one small child, and one unpredictable, highly trained warrioress with a lust for revenge that might get them all killed . . .

I wasn’t sure what to expect when I started this book. I have read quite a lot of historical fiction by writers such as Bernard Cornwell, but almost without exception these have been based on post-Roman times so this was my first excursion into the heart of pre-Roman, Iron Age Britain.

I have to admit that I was a little put off by the cover. For some reason the stern looking, unwashed man on the front lead me to think that the novel would not be as good as I discovered it to be.

My first thought upon reading the opening chapters was that the characters seem very modern; they speak and act just like we do today, just with the odd Pagan god thrown in for a curse word every now and then. I found this a little unsettling at first, as it is quite different from the things I have read before, but it served to help build superbly rounded characters to which I could relate . I also enjoyed the growing sense of magic throughout the book and while I found parts predictable, other bits caught me quite by surprise.

The main characters, Dug, Spring and Lowa, are very well written and soon had faces in my mind. I liked Dug and felt I could relate to him very nicely, especially when it comes to cider! He just wants a quite life in a garrison somewhere, eating, drinking and sleeping but has a nasty habit of helping people and finding himself lumbered with them. Lowa is a very strong woman, both physically and mentally, and is a formidable warrior with a strong thirst for revenge. Spring is a young girl and a constant source of surprise. I don’t what to give too much away, but Spring may be more than she seems.

This is the first part of a trilogy and I am very much looking forward to reading the next two instalments.