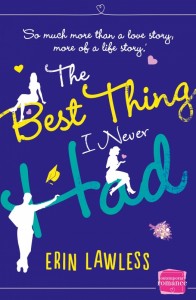 The majority of the book then flashes back to 2006. Seven friends who are all in their final year at university, the story does flick between them all at the beginning as each of the characters are established but once that settles, I found myself getting completely involved in the story, deciding who I liked and didn’t. Although it is told from the point of view of seven people, Erin’s writing makes it easy to follow as everything flows well. It’s not long before everything becomes a little complicated and I got caught up in the story and their lives, forgetting about everything else for a while.

Part One is set in 2006 and Part two in 2012 so you get to know these characters well, their motivation for their behaviour and resolution at the end. I read it thinking that it would make a great movie or tv show actually.

The biggest thing the novel did do, was to show the different personalities of its characters well. Each person is slightly different. Miles is the dedicated but slightly tunnel visioned boyfriend. He does do good in the end but it takes him a while.  He is boyfriend to Nicky who is the quietest of the group – a people pleaser. Johnny is the guy who doesn’t really want a relationship but then decides he likes Leigha. His best friend, Adam is good-looking and falls madly in love with Harriet, who is dedicated to her friends but also has feelings for Adam and their relationship is what causes most of the issues in the book. Sukie is the most direct of the group and Leigha wants to be the focus of everyone’s attention. I liked the mix of different people. It felt realistic. Everyone had both bad and redeaming qualities.

I think, whether you went to University or not, you can relate to one  if not all of these characters. I can definitely see each of the four girls in friendships I have had in the past. As the story developed, I found myself very quickly falling into Harriet’s camp. However, she does have faults and wasn’t always likeable and in some parts of the book, I wanted to shake her and ask her what the hell she was doing (I think any character and book that can have me talking out loud to the characters is good.) Although I did try,  I didn’t like Leigha very much.  I did at least gain a little understanding about her toward the end though. I found both girls to have faults and to a degree, both were at fault. The book was good in showing both points of view. It was good at showing how misunderstanding and envy can threaten the strongest of friendships.

The boys in general were likeable. I found Miles to be a little selfish and I did feel a little sorry for Johnny. The only character I really didn’t warm to was Sukie (despite her having her own tragedies to deal with.)  She was a little cold and I found her quickness to take Leigha’s side a little narrow-minded and I really disliked her for that. How she and Leigha are toward Harriet was horrible.

All the way through, I was speculating how I would like it to end. Even though it didn’t end like I excepted it to, I  liked the ending. It felt very realistic and believable.

Overall, I fell into this book and couldn’t put it down. I could completely relate to the aspects of friendships it conveys.  A great book and I fully recommend it.