Blog Tour: Sewing The Shadows Together by Alison Baillie 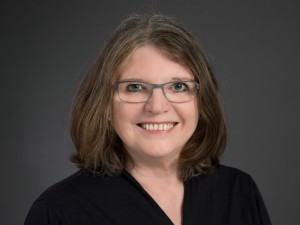 I am very happy to be welcoming Alison Bailee to Novel Kicks today and her blog tour for her debut novel, Sewing The Shadows Together. Thank you so much for joining me, Alison. Can you tell us a little about your writing day?

I don’t write as regularly as I should. I tend to write in bursts – and at the moment I’m not really writing because I’m concentrating on getting Sewing the Shadows Together launched.

Do you have any rituals when writing?

Not really – I’ve got more rituals about avoiding writing. I’m really bad about getting started – I have to sharpen numerous metaphorical pencils and get myself into the right writing mood before I can begin. But once I’ve started I get so immersed in my other world that I lose contact with the real world and can’t stop..

Your book is called Sewing the Shadows Together. Can you tell us a little about it and how the idea originated?

Tom and Sarah have both been scarred by the murder of Shona more than thirty years ago. They meet up again and their lives are thrown into turmoil when the supposed killer is proved innocent. The people around them fall under suspicion, and they uncover dark family secrets before the truth finally comes to light. The idea has been in my head for more than thirty years, since I was teaching in Edinburgh secondary schools. There were several high-profile murders at that time, and even after the cases were closed I couldn’t stop thinking about the people left behind. How do you ever get over something like that?

What’s your writing process like – do you plan much and edit as you go?

My novel was in my mind for a long time so I had a pretty good idea of what was going to happen before I started – even though I hadn’t written anything down. However, the story did take on a life of its own as I wrote and then I always went back and rewrote the earlier chapters if anything was changed.

I’ll have to think about this – I don’t think I have a favourite word. What comes into my mind was when one of my sons was a toddler he used to mutter ‘billiard table, billiard table’ over and over again. He didn’t know what it meant, but he just loved the sound. So I’m making that my favourite word today (although it is two words) – it really rolls of the tongue. 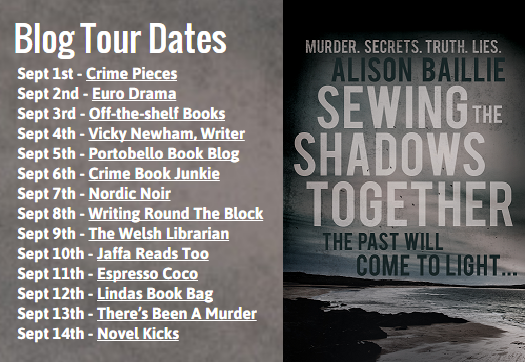 In your opinion, what elements make a good crime novel?

A good plot that keeps you guessing until the end, interesting characters and an atmospheric setting

Is there an author you particularly admire?

I admire Ian Rankin very much.

I‘d like to go for a drink with John Rebus because I think he would be a very interesting conversationalist.

If you’re only allowed to own three books, which three would you pick?

Very hard to say. I can’t imagine being restricted to three books, but think I’d pick three Ian Rankins, because I have read most of them more than once. I’ve learnt a lot about the craft of writing by rereading them.

Who would you invite for a fantasy dinner party?

Read as much as possible.

Write at least something every day. 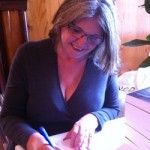 Sewing the Shadows Together is Alison’s first book; it’s been in her mind for more than thirty years since she was teaching English at Portobello High School in Edinburgh. There were several high-profile murders at that time and once the murders were solved she couldn’t stop thinking about the families. How do you ever get over something like that?

Alison loves reading crime fiction and also became very interested in cold case reviews, miscarriages of justice and the use of DNA evidence. The story was taking shape in the back of her mind, a murder mystery, showing the effects of murder on ordinary people and finally she had the time to write it. She became completely involved in the book, the settings in Edinburgh, the Western Isles and South Africa.

For more information on Alison, visit her website: http://alisonbaillie.com 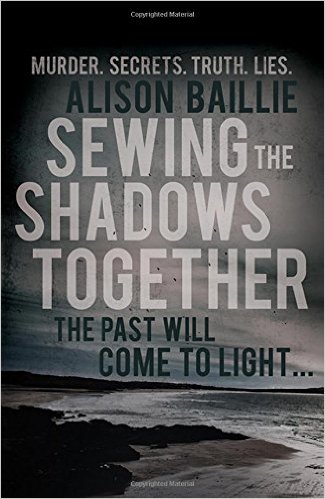 My verdict on Sewing the Shadows Together:

Can you ever really know someone? More than thirty years after thirteen-years old Shona McIver was murdered in a Scottish seaside town, her brother Tom and her best friend Sarah meet again at a school reunion.
The tragedy has cast a shadow over both their lives, but when DNA evidence shows that the wrong man was convicted, their emotions and relationships are thrown into turmoil. In the search for the real killer, they are caught up in a web of secrets, suspicion, death – and love – before the truth finally comes to light.

I like crime novels that surprise me and this one certainly did. From the beginning I thought I had a great idea as to who was responsible for Shona’s death. The ending wasn’t what I imagined and this made it not only great but totally unpredictable. It kept me wanting to turn the page and I was reading this without realising that a large amount of time had past.

The writing style is easy to fall into and Alison throws a load of red herrings, clues and twists into the plot to seriously keep you guessing right up until the end and the killer could have been anyone especially as many of the characters were there when the murder occurred over thirty years prior to the start of the book.

The book is told mostly from Sarah’s point of view; flipping to Tom at various points. Sarah is a lost character at the beginning of the book and is quite placid. She lets a lot of her life pass her by and many of the other characters – her mother and her husband walk all over her. She is a very timid character and you want to give her a shake (or I did anyway.)

I had little connection with Rory’s character. He lets his charm get him through life and I don’t like how he treats Sarah. Tom is a likeable hero and I felt sympathy for him. He is as lost as Sarah in his own way. I liked Sarah and Tom together and willed them all the way through to make it as a couple.

This is a good murder mystery. This is as much a look at the lives of these ordinary people having to deal with loss as it is about solving the murder. A great debut novel. I look forward to reading more from Alison.

Sewing the Shadows Together is published by Matador (August 2015) and I thank them for the review copy.