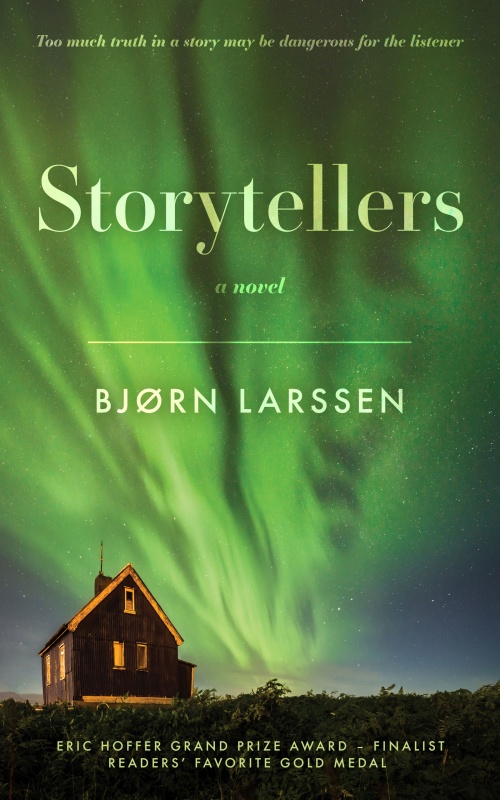 I am very pleased to be welcoming Bjørn Larssen and the blog tour for his novel, Storytellers.

Would you murder your brothers to keep them from telling the truth about themselves?

On a long, cold Icelandic night in March 1920, Gunnar, a hermit blacksmith, finds himself with an unwanted lodger – Sigurd, an injured stranger who offers a story from the past. But some stories, even those of an old man who can barely walk, are too dangerous to hear. They alter the listeners’ lives forever… by ending them.

Others are keen on changing Gunnar’s life as well. Depending on who gets to tell his story, it might lead towards an unwanted marriage, an intervention, rejoining the Church, letting the elf drive him insane, or succumbing to the demons in his mind. Will he manage to write his own last chapter?

Bjørn has shared an extract today. Grab that hot drink, a comfortable chair and enjoy.

Like most writers, I have certain subjects that are dear to my heart. Three of them are neurodivergence, mental illness (not the same thing), and addiction.

My protagonist, Gunnar, is on the autism spectrum and has a generalised anxiety disorder accompanied by depression, self-medicated with alcohol. He is also living in the year 1920, before the word “depression” came into use at all. He’s an uneducated blacksmith in a society where showing feelings – revealing that you had them – outside your diaries or poems you wrote was impossible. It wasn’t seen as cynical to say there was no time for grief or melancholy. It was simply the truth. There was too much work to be done.

It’s not just the external world that doesn’t understand Gunnar’s different mind. He has no words to express how he feels. All he knows is that he “shouldn’t” be like this, that “normal people” aren’t. During Icelandic prohibition, the only way to acquire alcohol was to visit a doctor and get it “prescribed” – Gunnar’s whisky is, ostentatiously, medication for his non-existent lung problems. A bottle of whisky a week isn’t enough anymore, though, so he makes moonshine… which is, of course, illegal, which makes his anxiety worse. There’s only one way he knows to feel better – he carries a flask wherever he goes.

There was a time in my life when I went through a long period of depression. Everything was grey. I didn’t even remember how to laugh. I was ashamed of admitting it. I “knew” that depression was a made-up thing that the educated members of the middle-class came up with to justify their laziness. Gunnar doesn’t have the words to express that, but if he could, he’d be thinking the same. There was one medication that calmed me down, even sent me into euphoria. It came in bottles.

Doctor Brynjólf’s wife was as welcoming and pleasant as always. The protruding belly didn’t seem to bother her, other than making her seem even more fragile. Everything here seemed fragile, including the chair Gunnar sat on. It had a soft crimson pillow he was afraid to rip, thin wooden legs that threatened to break, a back rest that he’d never dare rest his back on. She handed him a tiny cup of coffee with a matching saucer and a pretty, tiny silver spoon. Gunnar thanked her profusely, then slowly placed the offering on the table, trying not to touch the white cotton. His hands were not just black and dirty now, but also cold and sweaty. The blacksmith knew he didn’t fit in here, in this place full of clean, delicate objects. Everything he owned was sturdy. What was wrong with sturdy? Gunnar didn’t know why every time he visited the doctor his breath turned shallow, heartbeat accelerated, throat tightened. What he did know was that he couldn’t tell Doctor Brynjólf that he was afraid of his coffee cups. 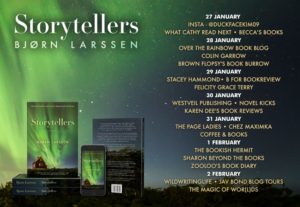 Brynjólf charged well for his services and for medication, whether it came in the form of a large flask, powders, or small pills. Not even the Sheriff, who was Brynjólf’s patient as well, could afford to live so lavishly. I am rich too, Gunnar thought without conviction. But what did that change? He admired the big windows – this was not a household where heat was a precious commodity. The colour of dark green wallpaper beautifully complimented the crimson curtains, made of the same soft fabric as the pillow Gunnar was sitting on. The doctor’s wife ushered the blacksmith inside just as he had finally managed to distract himself, pondering replacing the oil paint in his kitchen with wallpaper, and the practicalities of such a decision. Her porcelain smile made his heart race in a way that was not at all romantic.

“Your face looks grey,” said the doctor, instead of a welcome. He leaned forward, his fingers steepled, his smile warm. This made Gunnar slink back in his chair. “Are you okay? Are things going well?”

“Oh,” said the blacksmith, “just as always, just as always.” He took off his cap and held on to it to stop his hands from shaking.

“Is your back still hurting?”

“Have you been taking care of your posture while working?”

“Aye,” said Gunnar, who didn’t. He withdrew just a bit more. The room seemed to be overheated.

Brynjólf shook his head, and the smile started to wane, replaced by the usual concerned expression. “You really should keep your back straight. The pain is just going to get worse and then you won’t be able to work. Should I show you again?”

“The usual, then, I guess,” sighed the doctor. Gunnar tried to open his mouth, tried to gather courage to ask for a double dose of medication, but paradoxically couldn’t – because he hadn’t had any yet. No sound came out, as he watched the doctor put a sticker on the bottle. One spoon three times a day with meals, said the sticker.

“Is something going on? Are you doing… well? Any new customers?”

“Uh… just one. But all is well.” Gunnar started to wring his flat cap as if squeezing water out, stared down at his hands, stopped, put the cap on his head, looked back up, tried to smile, pulled the cap off again and started fiddling with it. “Very well,” he added, crushed by the weight of Brynjólf’s curious stare. A little drop of sweat slowly trickled down Gunnar’s forehead, stopping at his eyebrow.

“That’s it then, I suppose,” said the doctor, discreetly looking at the clock hanging over the door. “Let me know if there is anything else I can do for you… and I mean anything.”

Gunnar left, protectively clutching his medication to his chest. Brynjólf shook his head at the closed door and sighed. The doctor had a tendency to mix up his patients every now and then, but Gunnar was impossible to confuse with anyone else. He also seemed very determined to slide down the rabbit hole. Maybe the town’s community could come up with some sort of plan, before it’s too late, thought the doctor guiltily.

Once he made it outside, Gunnar hid behind the nearest corner. He looked around – nobody – took his little flask out and drank half of its contents in one go – it wasn’t a large flask, he’d point out, had anybody asked – he closed his eyes, savoured the burning in his throat, and imagined a black cloud lifting. He put the flask back, then rested his back against the wall and waited. It didn’t take long for his heartbeat to become more regular again and his stomach to calm down. Gunnar wiped his mouth on his coat sleeve, spat on the ground, and returned to the street, his walk steadier, his back straighter. Now he was ready to visit the merchant. 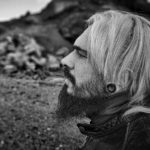 Bjørn Larssen is a Norse heathen made in Poland, but mostly located in a Dutch suburb, except for his heart which he lost in Iceland. Born in 1977, he self-published his first graphic novel at the age of seven in a limited edition of one, following this achievement several decades later with his first book containing multiple sentences and winning awards he didn’t design himself. His writing is described as ‘dark’ and ‘literary’, but he remains incapable of taking anything seriously for more than 60 seconds.

Bjørn has a degree in mathematics and has worked as a graphic designer, a model, a bartender, and a blacksmith (not all at the same time). His hobbies include sitting by open fires, dressing like an extra from Vikings, installing operating systems, and dreaming about living in a log cabin in the north of Iceland. He owns one (1) husband and is owned by one (1) neighbourhood cat.