Christina Jones is the award winning writer of many novels, the latest, ‘Moonshine,’ is due for release in January 2010. She’s the winner of ‘The Pure Passion Award’ for her novel ‘Love Potions,’ as well as a recipient of a ‘Melissa Nathan Comedy Romance Award’ for ‘Heaven Sent.’

What is your inspiration? 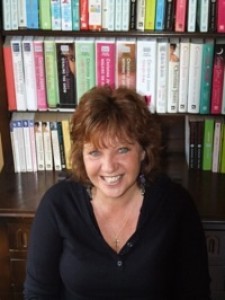 Life! Listening-in on other people’s conversations and people-watching and making things up about them! People are funny – and I write romantic comedy – so it’s wonderful just to listen-in. Being plain nosey I suppose…

Muddled and chaotic! I start writing at 6 a.m. and write until mid-day when I go to work in the local pub as a barmaid (great for inspiration!). I’ve always got something on the go – either a book or a short story or both – and I just pick up on where I was the day before. I only ever do one draft of anything, re-writing as I go along. I’m not some one who can set myself a certain number of words a day. I just do what I’m capable of doing. Sometimes it’s loads – sometimes I just put a comma in and take it out again….

I had my first short story published when I was 14. After that I just sent stories off randomly for years – some successful, others not. Then I joined the Writers Bureau and did their comprehensive course and found loads and loads of new outlets for my work, and at the same time joined the Romantic Novelists Association New Writers Scheme. Between the WB and the RNA I won several awards for shorter writing, and it was at one of these awards ceremonies that I met my then-agent who told me I could and should write a novel – and it all snowballed from there. I was simply lucky. In the right place at the right time.

Do you undergo much planning/research before beginning a book?

No planning at all. I make it all up as I go along. But research, yes – because if I’m writing about something “real” there’s always someone out there who’s an expert and they’ll ALWAYS tell you if you get it wrong, believe me!!!

How do you approach your editing process?

Er – I don’t really. I just write one draft, read through the previous day’s work, edit it as necessary then leave it. I leave proper editing to my lovely and clever editor.

Is there a book by another author that you’d wish you’d written?

NOT Harry Potter believe it or not. I’m not motivated by money!!! I suppose any of Peter Robinson’s crime novels (I’d love to be clever enough to write crime) or if we’re talking completely off-the-wall, then it would have to be Great Expectations.

Which writers do you admire?

Had you always wanted to be a writer? Did you have much literary experience prior to writing your first book?

I’ve always written! I wrote short stories before I went to school. I had imaginary people living inside my head and just wrote stuff about them. I was probably completely barking even then. As I’ve said, I had my first short story published when I was 14, and have probably written over 2,000 since then.

When working, do you prefer longhand or computer?

Computer now. It’s bliss. But in the early days it was longhand (at work, while I was cooking/watching telly – anywhere!) and then typing it all up – aargh!!! The thought of it now fills me with horror!

Who would you invite to a fantasy dinner? Why?

Charles Dickens because he was brilliant and a jobbing writer and knew how to blend humour with heartbreak and a great social commentator and had huge casts of characters (like me!) – and I think he would have been a sort of Dan Brown love/hate novelist these days.

1. Don’t write the life out of your work. Don’t edit and rewrite and edit over and over again.

2. Write from the heart and write what you love – it’ll shine through in your work.

3. Don’t follow trends – if you have a great off the wall idea go for it!

4. Don’t sweat and worry over “rules”. They’re there to be broken. Be yourself.

5. Find your own voice. Never copy anyone else. Be an individual and be proud!

To find out more about Christina go to her website at: http://www.christinajones.co.uk