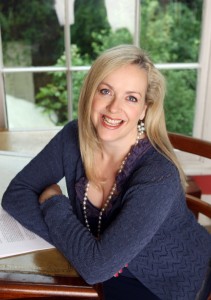 Isabel Wolff is the author of A Question of Love, Forget Me Not and A Vintage Affair. We were very pleased to be invited onto the blog tour for her new novel, Ghostwritten which was released by HarperCollins on 27th March. We had a chat with Isabel about her new book, her ideal dinner guests and her best writing moment so far…

Can you tell us about Ghostwritten?

The novel is set in present day Cornwall and on wartime Java, and is about a ghost writer, Jenni.  Jenni loves her job because it satisfies her curiosity about other peoples’ lives – she specialises in memoirs; it also means that she can immerse herself in their lives and not think about her own life too much. One day Jenni is commissioned to write the memoirs of a Dutch woman, Klara, who grew up on a rubber plantation on Java.  After the Japanese invasion Klara was interned in a prison camp, with her mother and younger brother: approaching 80 she has finally decided to tell her extraordinary story of survival.  Jenni is excited by this new commission, until she learns that Klara lives in Cornwall, in the very village that still holds terrors for Jenni after a traumatic incident there when she was a child.  Reluctantly, Jenni accepts, and goes to Polvarth.  As she listens to Klara’s story, she finds striking coincidences with her own life, and with the tragedy that has haunted her for so long. With Klara’s help she starts to lay to rest the ghosts of her past.

Where did the idea originate?

Whenever I start a new novel I always begin with what the main character does for a living, because from this everything else will flow.  Once I’d decided that my heroine was going to be a ghost writer I had to decide what the story that she ‘ghosts’ was going to be.  I knew that I wanted it to be a wartime story, not of the war in Europe, which has written about so much; but of the war in the Far East instead.  I’d always been interested in the Pacific War.  My father’s friend, Dennis, had been a POW on the Thai-Burma railroad, and was, my parents told me, still traumatised by the suffering he’d seen.  I’d read ‘A Town Like Alice’, set on Japanese-occupied Malaya – a novel that has stayed with me all my life.  And in the early 80s I avidly watched the popular TV series, ‘Tenko’ about a group of women and children who’ve been interned in a jungle camp on Sumatra.  I was fascinated by their determination to survive in the most appalling conditions.  I was equally fascinated in how being held in such a dreadful place affected their humanity.  They would often help each other, but at times were willing to betray each other too.  I became very interested in what had happened to the many thousands of Dutch women and children who were interned in the region.  There were no novels about what they had been through and so I decided to write one that would put their ordeal, and their courage, at its heart.

What are the steps you have when planning a novel? Do you edit as you go?

I always do a lot of research for my novels – especially for novels like Ghostwritten which have a large historical element.  I find that the research leads to the story lines.  For example when I was writing ‘A Vintage Affair’ I interviewed several women who run their own vintage dress shops. One of them told me that she goes to open air flea markets in France to buy garments, especially embroidered ones. This led me to a plot line in which half the novel is set in war-time Provence.  I plan my novels as much as I can, because I have to know where I’m going.  I can’t just start, and see where the story takes me – it would make me feel too insecure.  So I research, and plot, and only then do I feel confident enough to put pen to paper.  As a former journalist, I edit as I go – I don’t do successive drafts.  I give the manuscript to my editor in chunks, and incorporate any suggestions that she has at that stage.

My favourite word?  Now there’s a question.  I have quite young children, so I think it has to be ‘rambunctious’.  Whenever they’re being unruly I tell them not to be so ‘rambunctious’.  It’s such a peculiar word that it stops them in their tracks.  I’m also very fond of ‘discombobulate’.  So my favourite sentence is, ‘Children – don’t be so rambunctious!  You’re discombobulating me!’  Works every time.

My children make me laugh – especially my daughter, Alice, who is ten and does brilliant impressions, especially of me.  In books, ‘Just William’ still makes me laugh, as does Michael Dibdin’s dark comedy, ‘Dirty Tricks’.  On TV, ‘Big School’ made me roar with laughter, especially Frances de la Tour’s marvellous headmistress, Ms Baron.  I also laugh – and cry – at re-runs of ‘M*A*S*H’, the ultimate comedy with a catch in the throat.

Ideal dinner guests are guests who chat and laugh without being domineering, who include everyone in their conversation, and who make me feel that they are enjoying themselves – the ultimate compliment.  I must say I find architects good company – they usually fizz with ideas and are very knowledgeable, and as we’re all affected by buildings I never mind an architect talking shop.  If I could invite any celebrity to dinner, I’d love to invite the glorious mezzo-soprano Cecilia Bartoli, and make her sing for her supper.

I’d like to meet Mr Knightley in ‘Emma’.  He can seem a bit worthy but then comes the marvellous scene where the horrible vicar, Mr Elton, egged on by his ghastly wife, rudely refuses to dance with young Harriet Smith at the ball.  In a flash Mr Knightley stands up and leads her onto the floor, saving her from public humiliation! This scene still makes me cry – the goodness of his character.  I would like to meet Mr Knightley and tell him how much I love him for it.

Do you have any writing rituals and advice for defeating writers block?

I remember my dear father, who I always chatted to about my novels, saying, whenever I felt a bit stuck. ‘Then stop writing and start thinking.’  It’s such good advice.  If I can’t write, it’s because there’s a problem with the plot, or with the mechanics of making a scene ‘work’.  Once I’ve solved it then the words will start to flow.

Which authors inspire you and has there been a book that you’ve read, that has stuck with you?

Authors who inspire me?  Jane Austen, William Thackeray, Elizabeth Gaskell, Anthony Trollope – for the compelling plots and rounded, three-dimensional characters who are people of the kind we can meet every day.  As for books that have stuck with me, I love Rohinton Mistry’s modern masterpiece, ‘A Fine Balance’ about India under Mrs Gandhi; the characters remain so cheerful, brave and optimistic in the face of the most crushing difficulties and disappointments.  But the book that perhaps means more to me than any other, is ‘A Town Like Alice’. Nevil Shute’s quiet heroine, Jean Paget and the Australian POW who is crucified for her, Joe Harman, have never left me.  I still remember how I felt, when I read it, aged 12 – the huge emotions that it summoned.  I think that this is one of the main reasons why I wrote Ghostwritten.  If readers find my novel even a fraction as moving and compelling as ‘A Town Like Alice’ then I shall feel that I’ve done well.

Best moment as a writer, so far?

When ‘A Vintage Affair’ was chosen by 100 individual booksellers in the US to be the Barnes & Noble ‘Main Selection’ title in 2010. That was a wonderful, as was learning that that novel has now been reprinted 12 times.

Plot, plot, plot.  In my opinion you need to know where you’re going.  Writing a novel is like building a house – it has to be structured, and planned.

However despondent you feel, try and write at least a few words every day as even this small increase will encourage you.  And if you have to scrub those words out, and write new ones, that’s still progress, and an important part of the book’s journey towards completion.

Don’t discuss your novel with anyone except your best friend/partner/agent (if you have one); you don’t want people asking you ‘how’s the novel going?’ if you’re still not sure it’s going anywhere.

Ask yourself whether you have the right temperament to be a writer.  If you’d rather be down the pub/at a party/walking the dog than writing, then being a writer is probably not for you.

Ghostwritten will be published by HarperCollins on March 27th in paperback, at £7.99.  Isabel wrote it without the services of a ghost writer.