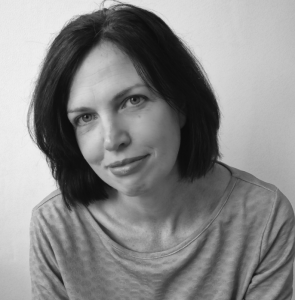 Kathryn’s first collection, Sunday at the Skin Launderette won the Forward Prize for best first collection in 2008. Her short stories have been published in magazines and broadcast on Radio 4. Her first novel, Love and Fallout was published by Seren Books in 2014. We chat with Kathryn about her book, her planning process and Oscar Wilde.

Can you tell us about your novel, Love and Fallout and how the idea originated?

The idea for the novel evolved from a short story I was writing about a charity worker who gets a sudden and unwelcome TV makeover. To help fill in my character’s history, I did some research into the Greenham Common peace camp where she’d protested as a teenager, and the more I read the more fascinated I became.

As I looked at film footage of the 1980s demonstrations, particularly ‘Embrace the Base’, when thirty-thousand women joined hands around the military airbase, I wondered where those women were now and what they might be doing. My original story grew: my character had a secret from her past, an old friend of hers turned up, and gradually a novel began to take shape.

What’s your planning process like when writing a novel?

This is my first novel so I don’t have a tried and tested method. Love and Fallout became difficult to control as the story expanded, and mid-way through I had to stop and properly consider the plot. Writing into the unknown is exciting, but I learned that it’s also necessary to have a loose idea of what’s ahead or you’ll write yourself into a corner.

‘What a Day for a Daydream’ – somehow I’ve turned daydreaming into a career choice.

Discombobulate is a good one. Or maybe clavicle.

What three things would you need with you on a desert island?

A coffee machine, a notebook, and a very long novel.

Do you edit as you go? How many words do you aim for in the first and last draft?

My approach to writing Love and Fallout was fairly chaotic. Some chapters were edited as I went along, others were worked on at a later date, but all of them were rewritten. I wasn’t aiming for a particular word count, just trying to get the story down, but when it came to the final edit I shaved off as much as possible, so the book came in at about 100,000 words. I tend to be impatient with books (or films) which are over long, but my novel has two time frames and quite a large cast of characters, so they all needed space. A book should be as short or long as the story demands.

What’s the best piece of writing advice you’ve had and what’s your best writing moment so far?

‘All writing is rewriting’ is a piece of advice I’ve hung on to. In an interview Hilary Mantel advised ‘Write the book you’d like to read’ and those are sage words: most writers are writing the story they haven’t found anywhere else. As to my best writing moment, that would probably be the day after the launch party for the novel – the relief of having officially finished.

Is there a book you’ve read that’s stuck with you and why?

Books from childhood are incredibly potent, and two of my earliest reading memories are The Selfish Giant by Oscar Wilde, which can still raise a tear, and also Edward Lear’s nonsense poetry. I loved the sheer strangeness of Lear, the delightful peculiarity of The Jumblies or The Dong with a Luminous Nose.

Which fictional character would you like to have a conversation with and what do you think you’d talk about?

Becky Sharp from Vanity Fair. She’d have an enormous supply of wicked stories so I’d let her do the talking.

1. Write about whatever compels you.

2. Don’t discuss your story too much or you’ll lose the will to write it.

3. Look carefully at the work of writers you admire to understand their techniques.

4. Find the people whose opinion you trust (it won’t always be flattering) and listen to them.

5. Expect to revise your novel extensively even after you think it’s finished. 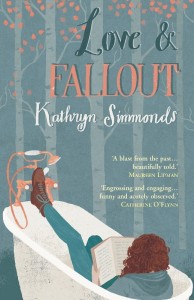 About Love and Fallout…

When Tessa’s best friend organises a surprise TV makeover for her, Tessa is horrified. It’s the last thing she needs – her business is on the brink of collapse, her marriage is under strain and her daughter is more interested in beauty pageants than student politics. What’s more, the ‘Greenham Common angle’ the TV producers have devised reopens some personal history Tessa has tried to forget. Then Angela gets in touch, Tessa’s least favourite member of the Greenham gang, and she’s drawn back into her muddy past. Moving between 1982 and the present, and set against the mass protests which touched thousands of women’s lives, Love and Fallout is a book about friendship, motherhood and the accidents that make us who we are.

(Published by Seren Books in June 2014 and is available in Paperback and e-book.)