The Night Flower by Sarah Stovell. 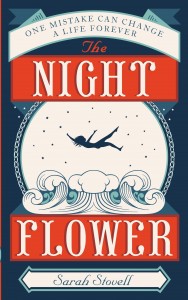 The Night Flower by Sarah Stovell is released via Tindal Street and is available from 15th August 2013.

Two girls are brought together under the worst of circumstances: a prison ship taking them from London to “parts beyond the sea. Barely surviving an appalling voyage, the two arrive just before Christmas into the blinding sun of the strange new island: Van Dieman’s Land. Here they are sent to work in the town’s nursery, where women of ill-repute give birth before being sent for correction. The nursery is run by corrupt, debauched Reverend and his idealistic son, who soon takes a fancy to Miriam. But Rose, her best friend and close confidant, watches jealously and makes plans to reverse their fortunes. This tale takes the reader on a thrilling Dickensian adventure to a Tasmanian “frontier town” where anything could happen and “morality” is made by monsters

The Night Flower tells the story of Rose (a well-educated Victorian governess,) and Miriam, a poor Gyspy girl, who are both transported to ‘the parts beyond the sea,’ for the crime of stealing. I found this book quite heavy at the beginning. The dialect used took me a little while to get used to but once I got into the rhythm of the book and the fact that each character gets an alternative chapter, I was hooked despite it being quite an uncomfortable read about prejudice and stigma.

This book had moments of heart-break, hope and frustration (mostly at how the female characters were treated by those around them and this is a big theme throughout the book.) It was good to see it from a female point of view. Plus, being into history, I like books which give me a fictional account using historical events as its basis.

The Night Flower gives us a look at another angle of Victorian age and I found it interesting and original.

With Rose’s story, you gradually, through diary entries find out what made her commit her crime. It doesn’t give everything away too soon. With Miriam, you find that she is a victim of her circumstance. As the book progressed, I began to like the characters although Rose’s motives were some I questioned at some points in the book – like when Miriam finds herself in trouble.

The setting is a little gloomy but it fits the plot of the story and Sarah Stovell sets this well. I found that I wanted to know about the background of some of the supporting characters that didn’t get as much development as the main characters – like Ma Dwyer. Her past is hinted at and I would quite happily read another book based on her too.

Overall, I enjoyed this book very much and I recommend it.