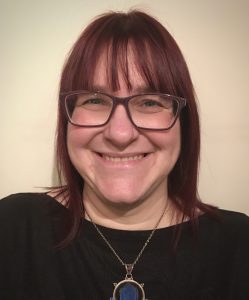 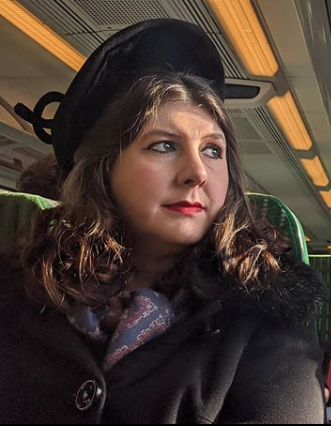 I am very happy to be welcoming Catherine Curzon and Eleanor Harkstead to Novel Kicks today. They are celebrating the publication of The Man in Room 423, which they have co-written.

In a heady cocktail of passion and poison, who can you really trust?

When Lizzie Aspinall and her sister meet for cocktails in a high-rise bar, the last thing she’s expecting is to spend the night in the arms of the nameless man in room 423. As a one-night stand with a stranger turns into a steamy affair with a dedicated detective, Lizzie finds herself in the sights of a stalker.

Ben Finneran has spent ten years pursuing a ruthless serial killer who poisons victims at random before disappearing into the shadows. He wants to believe that the attraction he and Lizzie share is just physical, but when they find themselves falling for each other, is Ben unwittingly leading a murderer straight to her door?

Pursued by the past and threatened by the present, who can Lizzie and Ben really trust?

Catherine and Eleanor have joined me to talk about what it’s like to co-write a book, the highs, challenges and how the work is divided. Over to you, ladies.

Catherine and I first crossed each others’ paths about three years ago when we were writing historical non-fiction for the same publisher, Pen and Sword. We got into a conversation one day about joint fiction writing, and after some hilarious conversations about Georgian gentlemen, we started to write a sandbox.

It started off with a plot but as we wrote it, it became huge and sprawling, written with the sort of freedom that isn’t possible with something that’s aimed for publication, and to be honest, written entirely to entertain ourselves. We’d written a huge amount in only a few weeks, by which point Catherine said maybe we should aim for publication. 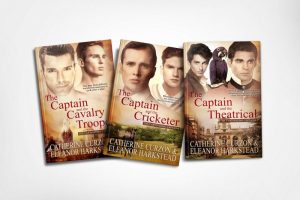 Catherine had had a couple of titles out with Pride, who publish LGBT+ fiction, and we realised that the sandbox had some wonderful moments that could be developed into fully-fledged novels. The first novel to emerge was The Captain and the Cavalry Trooper, a romance about First World War soldiers, which was published in April 2018. Since then, Pride have published five more Captivating Captains novels, and five short stories. Our first title for their Totally Bound imprint was The Ghost Garden. It was published early in 2019, and we were very excited when it was shortlisted for the Romantic Novelists’ Association Romantic Novel Awards 2020. This year, we have two romantic suspense novels out from Totally Bound – The Colour of Mermaids and The Man in Room 423.

As to the how of our writing… we talk about ideas for stories in Messenger, then before we get writing, we’ll often have a Skype first. Then we write in Google Docs, which gives us a great deal of freedom because you can access the same document on a computer or a mobile device. I end up writing on my phone in all sorts of places – on the bus, in the tearoom at work, in the waiting room at the doctor’s, in the chair at the hairdresser’s waiting for my dye to finish!

People always find the idea of co-authoring fiction unusual, even though it’s not strange at all in scriptwriting. Comedies like Friends and The Simpsons famously have had many authors, and even Shakespeare didn’t necessarily write on his own. But it seems that the Romantic movement brought to literature, and therefore to fiction, the idea of a lone, tortured genius author. There are many writers who will tell you that they’re happy sitting on their own behind a desk and really wouldn’t want to write with someone else. But this isn’t the case for all authors. 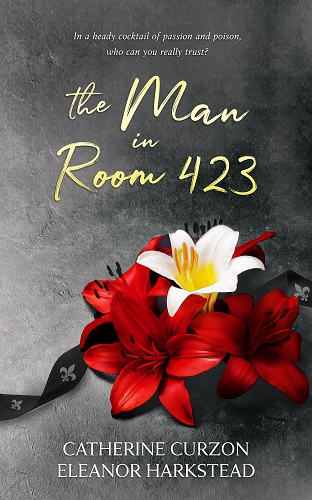 There’s several ways that co-writers work. What seems quite common is a chapter-by-chapter approach, where the point-of-view character alternates chapter-by-chapter. This can work quite well because a different voice comes across for each character’s chapter. Some co-writers separate the work even further, so that one of them comes up with the plot and the other ones does the writing. There’s other writing partnerships where one author will write the first draft, and the other writer embellishes it.

Catherine and I take a different approach. We divide up the cast, although where necessary we might share some characters but never the protagonists. We write together on the same page, so we don’t take away a chapter to each work on alone. This means that when our characters are having a conversation, it feels like a real conversation because it genuinely is two people talking on the page. Google Docs allows us more than one person to write on the page at the same time – in the past, you could only achieve the same effect by emailing each other constantly or by being in the same room taking turns at the same typewriter!

When we first started to share the same page, I did feel a bit self-conscious. We’ve all been in that situation when you’re typing away quite happily and as soon as someone hovers over your shoulder watching you, you find yourself suddenly incapable of typing accurately! But it didn’t take long to get over that and it was actually really fun. I’d be watching the cursor as Catherine wrote, wondering what she was coming up with.

We find we write best if we are both online at the same time, so we block out time in the evenings and at weekends when can write together. But outside of those times, we’ll still pop into the document and see if the other one has written something that we can add to. It can get rather addictive, to be honest!

We share pictures of characters, clothes, buildings, vehicles, places. This gives us an insight into each other’s minds, so we can both “see” the same thing. It would be no good to write about someone living in a house who lives in a Tudor cottage when written by one write and a Georgian townhouse when written by the other!

Writers exist on a spectrum, with plotters at one end who plan everything out with militaristic detail, or pantsers, who fly by the seat of their pants and dive straight into the story without having very if much idea of where the story and the characters is taking them. We’re more towards the plotter end of the spectrum. It helps to have an outline or route planned in advance that we both agree on, but equally, we’re open to lightbulb moments that can improve a certain part of a story, as well as listening to the characters who will tell us when we get there that they wouldn’t behave in the way we’d planned.

We’ve found collaborative writing to be incredibly fruitful and a great deal of fun, but it can bring its frustrations and difficulties too. It’s not for everyone. Catherine and I often find ourselves coming up with the same idea at exactly the same time, but we’re different people, and we don’t have entirely identical likes and dislikes, so sometimes we come up with quite different ideas from each other. We have to compromise. Often though when we come up with vastly different ideas, we can keep one aside for something else anyway, so nothing is wasted. We’ve written historical romance, romcoms and romantic suspense, and I think that writing together and having in each other a sounding board for ideas is what’s led us to develop so many ideas and stories.

Who knows what we’ll be writing next? Watch this space! 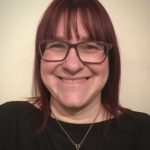 Catherine Curzon and Eleanor Harkstead began writing together in the spring of 2017 and swiftly discovered a shared love of sauce, well-dressed gents and a uniquely British sort of romance. They drink gallons of tea, spend hours discussing the importance of good tailoring and are never at a loss for a double entendre.

They are the authors of numerous short stories and two novel series, the de Chastelaine Chronicles, and the Captivating Captains, published by Totally Bound and Pride. Their novel The Ghost Garden was shortlisted for the 2020 Romantic Novel Awards.

Find out more at www.curzonharkstead.co.uk 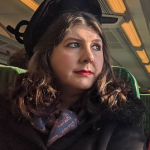 Sign up to our newsletter and receive our free, exclusive short story “Brighton Beaux”. https://curzonharkstead.co.uk/newsletter

The Man in Room 423 was published 5th May by Totally Bound Publishing. Click to view on Amazon UK.