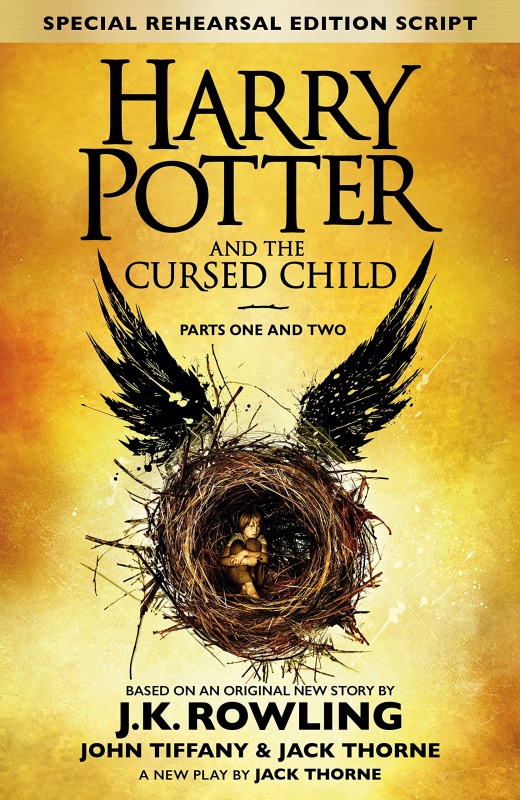 Hands up who amongst us have waited with baited breath for a new Harry Potter story? That’s pretty much every one of us. Now, hands up all those who think that this is that story…don’t be so hasty. Yes, this is Harry Potter, and at the same time, no it’s not.
I was so excited when I heard that they were releasing a script-book of the stage-play (I’ve tickets for this for May 2017) that I was determined to drop all my other reading as soon as it arrived. This I did and being a script, it didn’t take as long to read as one of the canon novels we’re used to. It didn’t help that I read it in two sittings, at least that’s no fault of the book itself.
To the bread and butter question; is it any good?

Not an easy thing to answer actually. After so long in between official releases, those of us fans who’ve taken to getting our fix from some of the excellent fan fiction out there were perhaps always going to be the most critical, I’m certainly one of those. I can only give this 3 stars as I think the problem the author(s) came up against was trying to please everyone and when you try and do that, you generally end up pleasing no-one. It’s not quite as bad as that seems, as I did enjoy it. I did come away dis-satisfied though.

Why? Because of the above. Now, I don’t go in for spoilers/telling about the story, if I can at all help it in my reviews, so I’ll do my best here. But some of the things that happen to drive the story along are so contrived, that I’d really like to know who came up with the story? Whose idea was it and who fleshed it out? Characters act out of well, character, to what we’ve come to know about them (except when not in the canon universe – nearest I’ll come to having to give a spoiler alert), things happen that (nothing to do with the capabilities of magic here) are obviously just devices to drive the story along and I found myself saying out loud, ‘Puleeese….’

By writing that last chapter in The Deathly Hallows, JK Rowling effectively excluded all possibility of any real harm coming to the main characters until that point, so if was very unlikely that we’d get anything from that time period from her in any future writings. Which brings up to the ‘Next Generation’ of characters and where the future of Harry Potter related characters lie and admittedly, with whom much of the best part of this story lies. The future though, isn’t bright and doesn’t wear shades if this is the way she’s going to go, as this story left me cold.

I’m certain that her publishers, editors, Warners, anyone who has a financial interest in Harry Potter will be and has been for some time, trying to persuade JK to write more books. If the series is to survive, then it needs to have the one head chef and not three. Simply put, this is Harry Potter in a very general way and not up to the standard that we would expect of her.
Read for completeness sake, but if you’re new to this series – which planet have you been on? – leave this until last, including the wee booklets. Easily the poorest story in the HP Universe.