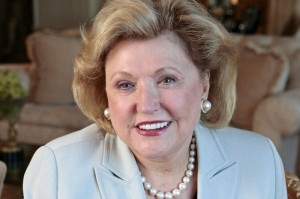 Barbara Taylor Bradford OBE has joined forces with The Sunday Times to help discover the next generation of young female writers.

Barbara is an ambassador for the National Literacy Trust, an independent UK charity that transforms lives through literacy.

The Write Stuff short story competition is aimed at girls aged 11-18 and who live in the UK. It was launched nationwide on Sunday (22nd March.)

The competition has been initiated following research by National Literacy Trust of more than 14,000 girls revealing that only one in four girls aged 14 to 16 (23%) see writing as cool, and almost half prefer watching TV to reading (49%).

“I feel it’s critical to reach out to girls and young women who want to share a story they have created and inspire a new generation of female writers and readers. It’s really important that female authors like myself take the lead as role models for girls and young women and encourage them to reach their full potential,” says author, Barbara Taylor Bradford who is due to release her 30th novel, The Cavendon Women on 26th March 2015.

Barbara Taylor Bradford is asking girls to write a short, fictional story with a central theme of ‘friendship’. It should run to a maximum of 1,000 words, not including the title.

The three overall category winners will also each receive a box of books kindly donated by HarperCollins.

The stories will be judged on:

The judges will include Barbara Taylor Bradford OBE, Eleanor Mills from The Sunday Times, Abigail Moss who is the director of National Literacy Trust, Lynne Drew from HarperCollins, Helena Coggan who, at aged 15 has had a novel published in February 2015 and Miranda Stephenson (Movellas Ambassador and who is 14 years of age.)

For full details on how to enter and information about the competition’s Terms and Conditions go to http://www.barbarataylorbradford.co.uk/thewritestuff. You can also follow The Write Stuff on Twitter: @WriteStuffUK