OK, I admit it, I already have the Christmas songs playing and if I could get away with it, I would already have my tree up. I adore this time of year. I love the songs, the lights and any excuse to dig out the Christmas films whilst eating mince pies.

When she finally uncovers the cottage from underneath the boughs of a weeping willow tree, Beth realises this is far more of a project than she bargained for and the locals are more than a little eccentric!

A chance encounter with gruff Jack, who appears to be the only male in the village under thirty, leaves the two of them at odds but it’s not long before Beth realises that Jack has hidden talents that could help her repair more than just Willow Cottage.

Thanks to Bella and Avon, we have an extract from Christmas Cheer. Enjoy…

Carly spun in Beth’s direction with an exaggerated movement. With slow blinks she looked at Beth until something registered.

‘Beth! This is … um … what was your name again?’ She swung precariously back towards Jack who stopped her falling on him with one hand whilst holding the pub table steady with the other.

‘I know who it is.’ Beth was trying to suppress the annoyance that was rapidly developing within her.

‘He’s lov-erly,’ cooed Carly whilst she stroked his arm in a deliberate action.

‘I’d like to know what he’s planning on doing with my drunk friend?’ Beth retorted. Jack let go of

Carly as if she were a lit firework.

As the accusation slowly registered, Carly looked hurt. ‘I’m not dunk!’ she protested as she slowly slid towards the floor.

Jack was looking blindly from one woman to the other as if he’d just been teleported there. ‘I was just …’

‘For someone that wasn’t looking for a relationship a few hours ago you’ve sure as hell come round to the idea quick!’ Beth stepped forward and grabbed Carly by one arm and hauled her into a standing position. ‘Come on! We’re leaving now.’

Carly wobbled on unsteady legs, grinned inanely at Jack and was towed away.

They stumbled into the sunshine and the mêlée of the Summer Fair quickly surrounded them. 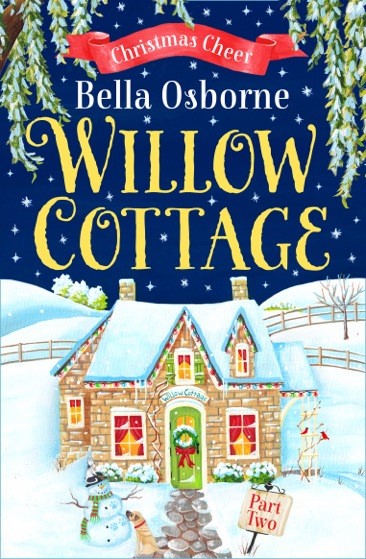 Now that the flash of temper had subsided Beth wasn’t entirely sure where she was heading.

Having separated Carly and Jack she wasn’t certain why she’d interfered but in that moment it had seemed like the only thing to do.

‘Beth, hang on!’ called out Jack, jogging up to them and catching Carly mid-sway.

Beth raised her eyebrows. ‘Shall I leave you to it?’ she asked, her question aimed pointedly at Jack.

‘She needs to sober up. Help me take her back to my place, will you?’ asked Jack.

‘And how safe will she be there?’

Beth didn’t really have another option. She couldn’t see Carly being able to crawl into her tent even though it purported to be a three-man version; she and Leo hadn’t had enough space.

‘You always have the answer, don’t you, Jack Selby?’ Beth was indignant.

‘You got a better one?’ He was frowning at her.

‘That’s not the point.’ People were slowing down and stopping to listen. ‘Right, fine. Come on then.’

She stood on the other side of Carly, put an arm round her and began to frogmarch her towards Jack’s.

‘She can’t, she’s drunk!’ said Jack. Then he leaned across to try to catch Beth’s eye. ‘Does she have a problem?’ he asked, his voice softer.

Beth halted and Carly swung forward precariously. ‘Are you calling my friend an alcoholic?’ 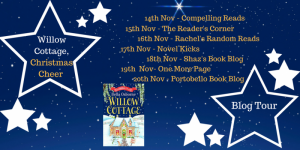 ‘Ooooh, shops,’ said Carly as they were waiting to cross the road at the far end of the village.

‘A butcher’s, a gift shop and a dress shop for anyone that wants to look like a pantomime dame.

Come on,’ said Beth, surging ahead.

‘Oh, no you don’t,’ Jack replied, which set Carly off into a fit of giggles. Was he still flirting with her?

Beth stopped in the middle of the road and leaned round a wobbling Carly to speak to Jack. ‘Look, in case you hadn’t realized, this is my best friend Carly Wilson. She is almost engaged to a wonderful man called Fergus. I do not want you sticking your oar in or anything else come to that!’

‘Traffic!’ he said, forcing Carly and Beth onto the pavement as a stream of cars trundled towards them. It was difficult to have a conversation with someone swaying in the middle so Beth focused on moving Carly along as quickly as possible.

Our verdict of Christmas Cheer.

Firstly. Cruel, cruel Bella. Making me wait for the next installment of Willow Cottage.

Secondly. Clever, clever Bella for releasing Willow Cottage in such a captivating format.

At the end of part one, we were left hanging with events in Dumbleford – still love the name of this village and am trying to reign in my jealously for not coming up with the name before her – starting to come to a boil. Though reluctant to accept her growing feelings for Jack, not helped by her best friend Carly inadvertently getting in the way, Beth finds herself drawn into village life and finds herself surprisingly enjoying it, albeit Shirley the local ‘bag lady’ providing more than her fair share of surprises..

Over the course of this installment, the titled Willow Cottage becomes more and more the country ideal it can only become, but will it be enough to convince her to stay? We shall have to wait and see. I for one can’t wait and, if you really want to know more of what happens here, find out from someone else.

This story is up to the same standards as Ms Osborne’s previous releases and I expect no less from one of the genre’s most talented new authors. If she carries on in this fashion, it won’t be long before she’s talked about in the same breath as, say, a certain Katie Fforde.

I dare say we’ll get an omnibus edition of Willow Cottage after it completes, but that’ll only be what it deserves.

Thank you Netgalley for allowing me to read this book.

A Family Holiday was published earlier this year and her third novel, Willow Cottage is being released over four digital instalments before being released in full in 2017.