Blog Tour: Review – The Quality of Silence by Rosamund Lupton 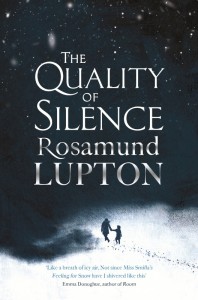 On 24th November Yasmin and her deaf daughter Ruby arrive in Alaska.

Within hours they are driving alone across a frozen wilderness, where nothing grows, where no one lives, where tears freeze and night will last for another fifty-four days.

They are looking for Ruby’s father. Travelling deeper into a silent land. They still cannot find him. And someone is watching them in the dark.

This was the first book i’ve read by Rosamund Lupton so I was not sure what to expect. The premise of the book sounded interesting though. I started this book and finished it the day after I had started. I could not put it down.

Yasmin and Ruby arrive in Alaska expecting to see Matt standing there waiting for them. Instead, they are met by the Police with news that Matt has been killed by a fire in the small village he had been staying in, Anaktue. Not convinced that he is dead and determined to find him, Yasmin and Ruby set off on a perilous journey across Alaska. Not only do they battle with someone following them (where you assume he wants to hurt them) but also against the fierce and unrelenting elements.

The writing sets such a vivid image of the landscape of Alaska. I really did feel as though I was on the journey with Yasmin and Ruby. The description is written so well and as Yasmin and Ruby get further away from civilisation, I started to feel more anxious for them. I really got wrapped up in these characters and this story.

I liked that, as well as the plot element where they are trying to find Matt, it explores the relationship between Yasmin and Ruby. They seem to gain a better understanding of one another by the end of the book. I found the parts where Ruby was narrating particularly endearing (the POV switches between Yasmin and Ruby for the majority of the novel with other characters having a small amount of space too.) Ruby has a strong voice and it was interesting to explore how she saw the world around her compared to Yasmin.

I do love a mystery in a novel. Is Matt really dead and who is the stranger following them? All the way through, I was trying to work out who it was. I was convinced I knew but I was wrong which made the reveal all the more exciting. I am not sure whether a mother would go off into the Alaskan wilderness with her deaf ten-year old daughter. However, you don’t know what people will do when faced with loosing someone who they love. 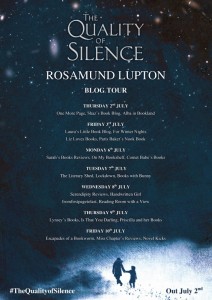 The first two-thirds of the book covers Yasmin and Ruby’s journey and the action really  kicks off in the last third but I didn’t in any way lose interest in what was going on. I wanted to know what happened to Matt and whether they find Matt and in what state they found him in.

Overall, I really liked this book. It’s compelling and beautifully written. It’s perfect as a holiday book and I am looking forward to reading other books by Rosamund Lupton. This book was a great introduction for me.

The Quality of Silence by Rosamund Lupton is published by Little Brown on 2nd July. Thank you to them for an advanced review copy. It’s available from most major bookshops. Click here to view on Amazon UK.

Check out the other stops on the blog tour for The Quality of Silence.

One Response to Blog Tour: Review – The Quality of Silence by Rosamund Lupton