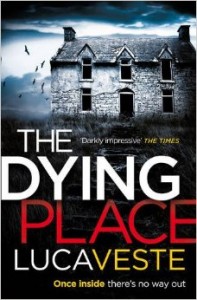 I was a huge fan of Dead Gone (the debut novel by Luca Veste,) so I was intrigued to be reading his latest book, The Dying Place.

Set in Liverpool, we return to DI David Murphy and his partner, DS Laura Rossi as they race to save a group of teenagers that are disappearing and being held against their will.

From the first page, I was hooked on this story and I could not put it down. There were many twists and turns and just when I thought I had the plot sussed, something else would happen that I totally was not expecting and areas of the plot shocked me too. I had to go back and read a few passages as I was trying to get through it so quickly as I wanted to know what happened next.

As a reader, I felt as though I was being included in quite a moral debate between feeling sorry for the boys being held and the people holding them who simply want to ‘teach them respect and to help them make something of their lives’ – they end up just using very questionable methods that are a step too far (some scenes had me actually wincing away from the book.) Each side of the story is not black and white and I found myself not being able to sit solidly on one side of the argument.

The setting and style of the book is done so well and I really got a sense that I was immersed in the area and what was going on. I think this (and Dead Gone before it,) would make such a good crime drama for TV. I could see it translating well.

It was good to be back with Murphy and Rossi and I do like them as a team. Their chemistry as characters is great and well written.

If you are a fan of crime fiction, I really cannot recommend this book enough.

(Published as an e-book by Avon on 23rd October 2014. The paperback is due for release on 4th December.)

The blog tour continues tomorrow over at Raven Crime Reads.

One Response to Blog Tour: The Dying Place by Luca Veste – Review.