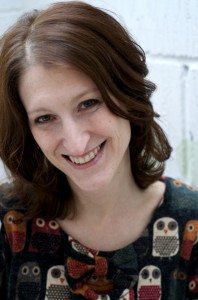 We are super excited to be welcoming Julie Cohen to our blog today. Julie is the best-selling author of Getting Away With It and Dear Thing. Her new novel, Where Loves Lies was released by Bantam Press on 31st July. We are very happy to be kicking off her blog tour today for her new novel. We chat with Julie about her book, her writing rituals and Sherlock Holmes…

Can you tell us about your new book, Where Love Lies and how the idea originated?

I’m calling it a sort of twisted love story. It’s about Felicity, who has been happily married to Quinn for a year—at least she thinks she is happily married. Until out of the blue one day she starts to smell the scent of frangipani, and along with that, she experiences overwhelming memories of a man she was in love with ten years ago, before she met Quinn. Believing this is some sort of sign, she leaves Quinn, to find Ewan, her first love, and discover why she is having these emotions. On the way she grapples with the different kinds of love, and tries to understand her own heart. But sometimes our heart is not ours to control…

I can’t actually tell you how the idea began, because if I did, it would give away part of the story! But it is based, very loosely, on something that actually happened to a friend of mine. I talk about it in a note at the end of the book, so you will have to read the book to find out! Sorry.

Which fictional character would you like to chat to and what would you talk about?

I am an enormous Sherlock Holmes geek, and have been for most of my life—so much so that I’m an official cartoonist for the Sherlock Holmes Society, and I’ve written an alt-reality Sherlock Holmes story that will be published later in the year, under my initials JE Cohen. So I would love to talk to Mr Holmes. In the stories, he’s a charming conversationalist as well as the world’s greatest detective. I’d like to go to dinner with him, and maybe a violin concert, and then I would tag along whilst he solved one of his cases! 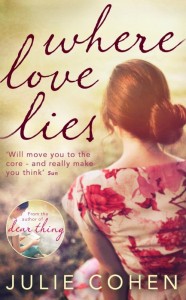 Which three books (that you’ve read,) have changed your life?

Rachel’s Holiday by Marian Keyes—the first time I realised that commercial fiction could tackle serious subjects, in a moving, yet readable way

The Wizard of Earthsea by Ursula LeGuin—this was the book that made me want to be a writer.

If you could travel to any point in the past, where would you go and why?

I have a great love of Victorian literature so I would probably travel back to the 1880s. I would be an outspoken suffragette lady novelist with exquisite clothing.

Do you cast your characters and if so, who do you have in mind for Felicity and Quinn?

I never really had a real person in mind for Felicity—she’s too real in my head to see her as anyone other than herself—but Quinn was inspired by the lovely Ben Whishaw. 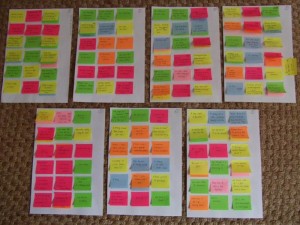 What are your TV/Music guilty pleasures?

I am utterly, utterly obsessed by Hannibal. I watch each episode at least three times and (very guilty pleasure) an author mate of mine and I have been writing fanfic on Twitter. We even have a top-secret Wattpad fanfic site. I would tell you about it, but then I would have to kill you. And eat you.

What is your planning/editing process?

Post-Its. I like to plan my books, and revise them, using different colour Post-It notes for each story strand. It’s very handy and also very pretty.

‘Give yourself permission to write crap. You can always go back and fix it later.’

What word and/or song would best describe you?

The song that makes me the most fundamentally happy and yet sad at the same time, and I think sums up the sort of thing I write, too, is ‘Tonight We Fly’ by The Divine Comedy. It’s fast-paced and yet contemplative, melancholy and yet elated; it soars and it dips.

You can find out more about Julie and her novels by visiting her website: http://www.julie-cohen.com/

The blog tour for Where Love Lies continues tomorrow at http://girlslovetoread.com/

Buy Where Love Lies at Amazon and other leading bookstores.