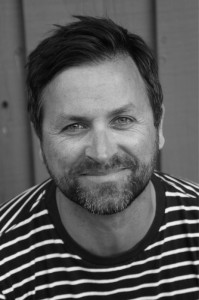 We are very excited to be welcoming Jon Rance and his blog tour for This Family Life today. Jon’s previous novels include Happy Endings and This Twentysomething Life. His new book, This Family Life, is the sequel to Jon’s novel, This Thirtysomething Life and was released recently by Amazon Media (the kindle version is currently only 99 pence.)

Jon joins us today to talk about his new book and he also gives us a sneak preview too. Hi Jon and welcome….

Hello and a HUGE thank you to Novel Kicks for hosting what is the fourteenth stop on my ‘This Family Life’ Blog Tour. If you missed the last blog you can see it here http://hell4heather.com/

So hello again and today I’m going to talk about my new novel ‘This Family Life’. The book is written as a diary from the point of view of thirtysomething husband and new father, Harry Spencer. The book is the sequel to ‘This Thirtysomething Life’ and Harry’s job as a secondary school teacher wasn’t really integral to the plot in that book, but in ‘This Family Life’ I wanted to explore his career a lot more.

In this book, new father Harry realises that now he’s a parent it’s time he started taking his job more seriously, and so when he’s offered a promotion to head of department, he sees this as the chance to prove to his wife Emily, and more importantly to himself that he can do it. I was lucky enough to have a very good friend who’s actually a teacher and is also head of his department, and so he gave me some great inside information on what it’s really like.

The school scenes in the book were some of my favourite to write and I hope I conveyed what it’s really like. Obviously I added a lot more comedy and took some literary freedom with it, but I tried to add it bits of reality in a hopefully a humorous way. There’s a bit when Harry takes the job as head of department and he gets his new schedule, full of meetings, pre-meetings, training, and other tasks and he innocently asks, ‘And when am I going to find time to actually teach?’ and he’s laughed at, but he wasn’t joking. This is one of those moments that I know a lot of teachers have, and I hope that although in the book it’s sort of a joke, it’s something that teachers can relate to.

Harry’s career takes on a lot more importance in this book as he tries to grow up and be the best father and husband he can. I have two young children and in my family it’s my wife who is the teacher, and one thing that she finds difficult is being away from her kids and I know that she rushes home every day to see them as much as she can. At the beginning of the book, Harry has to return to school after two weeks off for Christmas and he realises just how much he misses the time spent with his son William. This is an issue that I’m sure a lot of parents go through because balancing work and time at home with the kids is an on-going battle, and it’s one that Harry finds very difficult. Below is an excerpt from the book and its Harry’s first meeting as head of department.

On the sofa. Emily watching TV. Eating a carrot and pretending it’s a Mars bar.

The meeting went well (ish). I was worried the other teachers might be pissed off I was given the Head of Department role over them. Clive Barker (eldest staff member) congratulated me and even Chris Bartlett (usually annoyed about something) didn’t seem too bothered.

‘You deserve it,’ said Clive.

‘Thanks, Clive,’ I said even though I knew he probably didn’t mean it.

‘I would have turned it down anyway. Too old for all the shenanigans. School politics are for the young. Watch out for the French department.’

‘And you’re supposed to be a History teacher,’ said Chris and they both laughed, but neither of them told me why I shouldn’t trust the French department. The rest of the meeting carried on in much the same vein. Fourth staff member George Fothergill was off sick (again). Apparently, he has (in the words of Clive) the squits or (in the words of Chris) some seriously nasty shit. I had to go through all the pre-meeting targets we’ve been set, which obviously didn’t go down well (‘pointless, poxy, unrealistic – we might as well send everyone home now and tell them to work at fucking Tesco,’ (Chris)), and then we discussed the upcoming year eight trip to Leeds Castle.

‘I won’t let that happen,’ I said firmly.

Last year a group of students decided it would be a good idea to swim in the lake around the castle, which wouldn’t have been too bad except that one of them (Tony Strang) couldn’t swim and almost drowned. Unfortunately, the person who went in to rescue him wasn’t a very strong swimmer either and they almost drowned too. A staff member at the castle eventually rescued them both, but they almost drowned too because Tony Strang freaked out and is quite heavy for a child of his age. Eventually, everyone made it back to dry land and no one drowned.

I had one last cigarette and then I stopped at the garage on the drive home and got some Extra Strong Mints. I also drove past KFC five times debating whether to go in for a sneaky bucket. I think the girl on the drive-thru probably thought I was an escaped mental patient after I drove through twice without buying anything.

‘Can I help you?’ she said the second time.

‘I just want to smell it,’ I said salivating like a rabid dog.

‘I think you should go,’ said the girl.

‘Can I look at a bucket? Show me a bucket!’ I said taking a whiff of the Colonel’s finest, until she threatened to call the police and at that point I decided it was probably best to head home bucketless.

Tomorrow is Saturday. I’m usually excited about the weekend. The chance for a lie-in, some quality time with William and Emily, and a potter about in the shed. But those were the good old days. Tomorrow we’re up at seven for Boot Camp at the gym. Emily also wants to have an official weigh-in. I’m dreading it and I have piles of ASM paperwork to wade through. How did Eddie Collins do this when he was drunk for most of the time? 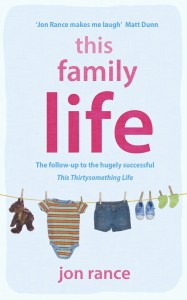 About This Family Life:

Things that might happen during your first year of parenthood:

2. You’ll be convinced your son is talking with a Japanese accent.

3. You’ll worry that when your son waves, it looks like a Nazi salute.

Taking up where This Thirtysomething Life left off, Harry Spencer and is wife Emily are back and trying to survive their first year of parenthood. It has its ups and downs (and a few bits in the middle), but along the way they begin to understand the true meaning of family and what it takes to be a parent.

Featuring a hilarious cast of extras including Harry’s father-in-law Derek, who has a unique problem with Scotch, Steve and Fiona, the parents from children’s entertainment hell, and a yoga instructor with a prominent camel-toe, This Family Life is the ultimate comedy for anyone who is a parent, has a parent, or is thinking about becoming one.

The tour continues tomorrow. Jon will be over at 23 Review Street – http://23reviewstreet.blogspot.co.uk/