Book Extract: Mistletoe and the Mouse by Elsa Simonetti 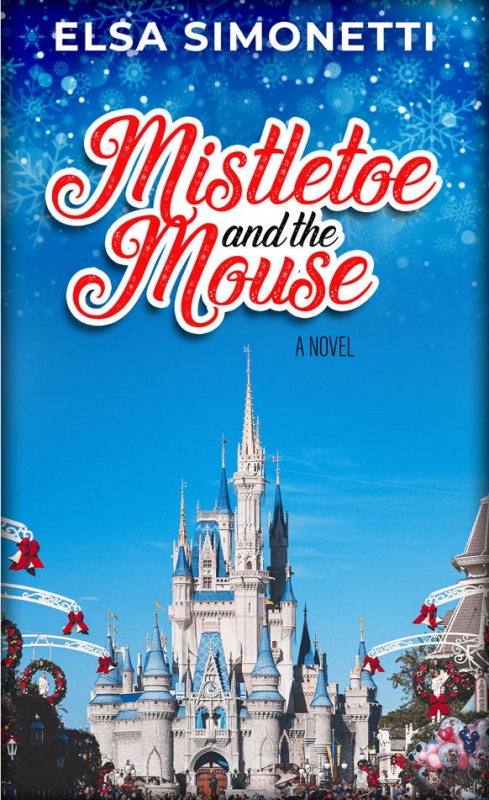 I am very happy to be welcoming fellow Disney lover Elsa Simonetti to Novel Kicks today and the mini blog blitz for her novel, Mistletoe and the Mouse.

Can a magical Christmas melt a frozen heart?

Join Belle and James as they visit Mickey Mouse for a sparkling holiday season at Disneyland Paris.

Belle has been numb since her mother died, and she can’t face Christmas at home without her. Instead she books a surprise holiday to her “happy place” – the Magic Kingdom. But her boyfriend James has problems of his own. He doesn’t “do Disney” and what will his mother think of him missing their family Christmas to go to Disneyland with Belle?

A festive romance with a sprinkling of Pixie Dust.

Belle has recently lost her mother, and faces her first Christmas without either of her parents. James, her boyfriend, has invited her to his family home for Christmas, but Belle has other ideas and has booked them a surprise holiday to Disneyland Paris. James isn’t sure how his mother will react to the news that they won’t be coming for Christmas, and they travel north to Edinburgh to break the news to her. Mrs. Buchan “upright, uptight, frigidly, rigidly efficient,” listens carefully to their plans before she pronounces judgement.

‘So, where exactly is it that you’re going on holiday?’ she asked politely. ‘James said that you would want to tell me about it. Somewhere that your mother loved, I believe?’

‘To Disneyland Paris,’ Belle told her.

‘Oh! Really! Oh goodness! How … nice …’ Mrs. Buchan said with a tinkling laugh that sounded like teaspoons in china cups. ‘So, you’ll be off to Disneyland, James? To meet Mr. Michael Mouse himself?’

‘Belle likes it there,’ he said through a mouthful of biscuit crumbs.

‘It was my mum’s happy place. And mine too.’ Belle said warmly. ‘To go at Christmas would have been a dream come true for Mum and me. She’d saved for it for years. That’s why I want to go.’

‘But, aren’t you both rather grown up for roundabouts and giant mice?’ Mrs. Buchan said, in that tone; her mouth forming her own unique moue of disdain. ‘Isn’t that kind of thing best left for children? Wouldn’t you rather go somewhere more authentic? I understand that you’ve hardly travelled at all, dear, so wouldn’t you prefer to broaden your horizons? Morocco is amazing, or even South America? Wouldn’t you rather experience a wee slice of culture? See the real world rather than a child’s theme park?’

Belle shook her head. ‘It not only for children; honestly it isn’t, it’s for the young at heart. Imagination is for everyone, isn’t it? That’s what Walt Disney thought, after all. Mum thought so too.’ Mrs. Buchan set her lips tightly together as she often did when Belle mentioned her mum.

‘Each to their own, I suppose,’ she said, looking Belle up and down. ‘I’m not sure that I can ever claim to have been one of the “young at heart”, but I can see that it means a lot to you. There’s a wee sparkle in your eye again. It’s the first time since … well, you know.’ She took a polite mouthful of tea, little finger extended, eyebrows raised. ‘If that’s what you need to do, then you should do it. Perhaps, James,’ she said thoughtfully, ‘it will do you as much good as Belle. Perhaps it’s time you did something that’s a little, well, how shall I put it, “out of your comfort zone”, isn’t that the phrase these days? Life can’t be all about rugby, James, dear.’

On that one subject, Belle and Mrs. Buchan could agree perfectly. 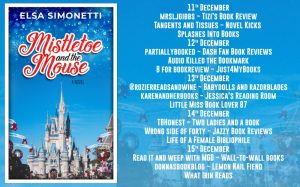 Mrs. Buchan was my favourite character to write about, and her voice flowed without any intervention from me; she was one of those characters who took over and wrote her own story. Her rigidity isn’t quite what it might seem at first, and she, like Belle, has a journey to make in the course of the story, even though she doesn’t travel anywhere. The changing relationship between Belle and James’s mother sheds light on both women, who are perhaps more alike than even I realised when I began writing about them!

Elsa Simonetti was born in the same year as Walt Disney World, but many miles away in the north of England. 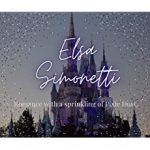 Her earliest Disney memory is crying during Bambi at the Saturday morning cinema club!

It wasn’t until her own children were small that her husband introduced her to the magic of Disneyland Paris, and since then she has become obsessed, proving Walt Disney’s own belief that “Laughter is timeless, imagination has no age and dreams are forever”. That was the seed of this story – that Disneyland is not just for children, but for anyone who is young at heart.