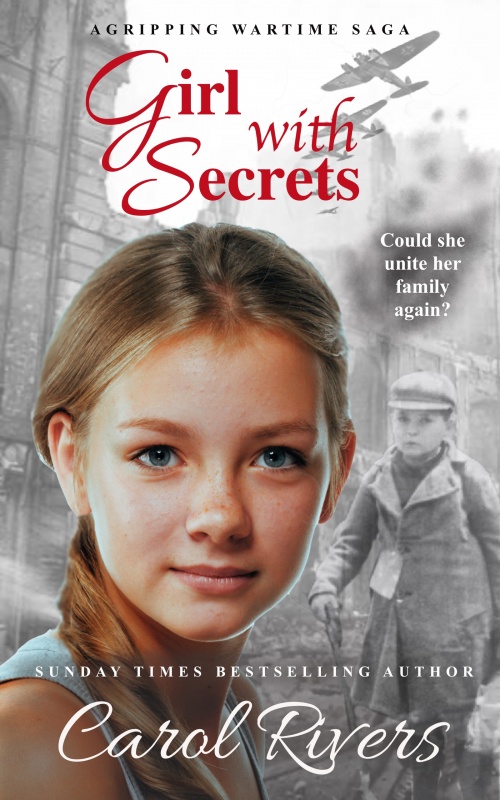 I’m happy to be welcoming Carol Rivers to Novel Kicks today and the blog tour for her book, Girl With Secrets.

But when her father gambles the family’s fortunes on a speculative investment in London’s docklands, Daisy and her family are swept up into the intrigue, danger and excitement.Desperately the Purbrights attempt to settle to a new life in the East End, but the whisperings of war grow louder.

Then, one late afternoon in September 1940, Adolf Hitler conducts a paralysing bombardment on London and war tightens its grip. Life changes dramatically and closely guarded secrets threaten the Purbrights’ happiness.

Can Daisy and her family survive one of the most fateful events of the 20th century?

Carol has shared an extract from Girl With Secrets so grab that drink, the comfy chair and enjoy.

Cheer up, ducks, you look as though you’ve lost a pound and found a penny.’ Mrs Hayes steered the rattling trolley towards the canteen at a rate of knots.

‘No, I haven’t found anything. Well, not really.’ Daisy trotted beside the tea lady trying to keep up, listening to the tea-stained mugs clink violently against each other. A quick manoeuvre to the left swerved them down another walkway in the opposite direction to the offices.

‘Either you have – or you haven’t,’ the tea lady objected. ‘Speak now or forever hold your peace.’

Daisy was not certain how – or even if – she should reveal what she had seen. If she was to tell anyone at all, it would be Mrs Hayes or even Bobby, but was there really something to tell? 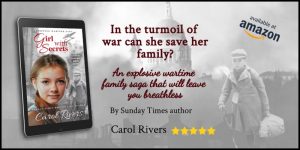 Perhaps she had imagined Aunt Betty standing close to Mr Calder? Had peering through one eye with the other closed distorted their figures? The more she thought, the more she was uncertain. Yet still the imprint of what she had witnessed remained in her mind. Just like Matt and Amelia’s almost-kiss.

Mrs Hayes launched the trolley into the doors of the canteen, where the scarred and dented flaps flew open. Once safely into the deserted room filled with stout wooden tables and chairs, smelling strongly of the cleaning agent that was used to kill the roaches and mice, the trolley was abandoned.

‘There now, all done,’ sighed Mrs Hayes, planting her hands on her hips as she studied Daisy. ‘Did you find your aunt?’

Daisy hesitated. ’Yes, but I didn’t actually speak to her.’

Mrs Hayes screwed up her eyes. ‘Who was that?’

‘They was doing the accounts, no doubt,’ Mrs Hayes said in a tone that brooked no argument as she waved a wooden spoon in Daisy’s direction. ‘A very important job is accounts. They’ve got to be kept up to date. Takes some doing; two heads is better than one.’

‘I suppose,’ Daisy agreed, not at all convinced.

’Your aunt is busy. Don’t go pestering her again.’ Mrs Hayes’s fierce, unmoving gaze held Daisy’s. ‘Why don’t you go up to the Lab? Bound to see your dad there. Odds on he’ll be inventing something that goes bang and ends up in a puff of smoke.’

Daisy nodded though she feared Mrs Hayes was employing diversionary tactics, just as her mother and father did. Mrs Hayes had never done this before and Daisy found it rather disappointing.

‘Look here, ducks,’ said Mrs Hayes, resuming her cheerful old self. ‘I’ve got a nice fat banger for you. I’ll wrap it in baking paper. It’s cold from yesterday, but still tasty. Eat it on the QT. Don’t let anyone see or they’ll want one too.’

Daisy swiftly stuffed the disguised sausage into her pocket.

‘Run along now. The cleaners are coming.’ 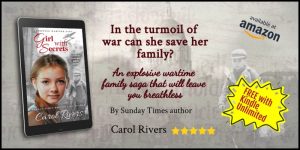 With a final twirl of the spoon, Mrs Hayes returned her attention to the big double ovens. Daisy made her way to the laboratory. The Lab as it was known, was where her father conducted his investigations into how, why and where a thing might work. It was a room full of test tubes and bottles and strong smelling chemicals and little flames that danced out of the Bunsen Burners.

It was here that she felt as though she was witnessing one of Houdini’s magic tricks, as stuffy Matt might say. A trick coming true right in front of her eyes.

Daisy smelled the room on the upper floor long before she arrived for the Lab  had a particular odour; gassy and smoky and altogether exciting.

She slipped out her parcel, nibbled at the treat and leaped the stairs. Mrs Hayes had never given her a sausage before. It was as if – well, if Daisy didn’t know better –  the sausage had been offered in conjunction with the tea-lady’s spoon-warning about Aunt Betty and Mr Calder. 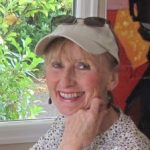 Mum and Dad were both East Enders who were born on the famous or should I say the then infamous Isle of Dogs. Their family were immigrants who travelled to the UK from Ireland and France, while others emigrated to America.

As a child I would listen to the adults spinning their colourful stories, as my cousins and I drank pop under the table.

I know the seeds of all my stories come from those far off times that feel like only yesterday. So I would like to say a big heartfelt thank you to all my family and ancestors wherever you are now … UK, Ireland, France or America, as you’ve handed down to me the magic and love of story telling.

To purchase Girl With Secrets, visit Amazon UK or Amazon US.